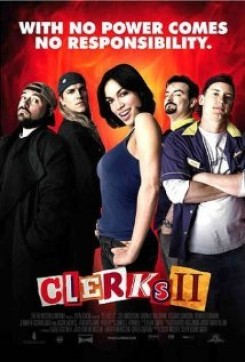 After more than a decade, the icons of slackerdom are back — this time working at Mooby's, a McDonald's-type fast-food chain. As they face their 30s and the impending responsibilities of adulthood, a disillusioned Dante (Brian O'Halloran) and Randal (Jeff Anderson) are still trying to decide what they want to do when they grow up.

Kinky Kelly is called to perform "inter-species erotica" for Dante's going-away party. On a stage set up at Mooby's, a man decked out in leather shows up to dance and romance a donkey. The animal wore a lightweight vinyl mask and a halter with a weight attached to ensure it stayed on mark while the actor performed his lascivious gyrations.

Only crew and actors who needed to be on set were present during the filming of this scene. The actor's choreographed movements had been cleared by the trainer beforehand, and he was extremely aware of the animal's position at all times. The actor was even overheard apologizing to the donkey for the type of scene that it was!