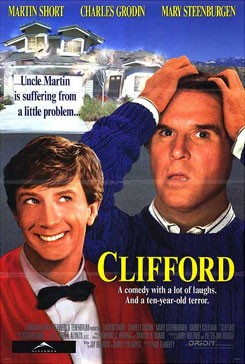 Clifford is a light-hearted comedy about a precocious ten-year-old who will stop at nothing in order to visit his life's desire, a theme park called Dinosaur World. The monsterously mischievous boy, Clifford, is played to hilarious perfection by the pixie-sized comedian, Martin Short. While his parents take a vacation from him, Clifford stays with his bachelor uncle, Martin. Martin agrees to the arrangement because he wants his fiance Sarah to think he likes children and also because he hasn't seen Clifford since he was a baby and has no idea of what he's getting into. What follows is a devilish duel between the two where Clifford always seems to triumph until Uncle Martin takes him on a midnight trip to Dinosaur World that Clifford will never forget.

Clifford tricks Uncle Martin into taking a strange dog home from the airport. As Martin wraps the leash around his wrist, the huge hound spots a cat and gives chase dragging Martin through yards, shrubs and a small opening in a fence which Martin slams into. This scene was shot in cuts filming the animals separately. The dog and cat merely ran from A to B with food as a reward.