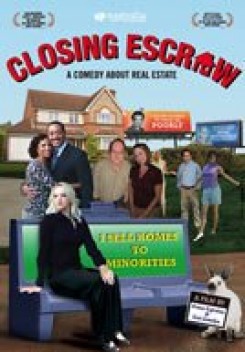 Today's hot real estate market is ripe for a comedy like Closing Escrow, which follows three families trying to find their dream home who just happen to fall in love with the same property. The house-hunting process and bidding war that ensues will try their realtors' patience and show just how low prospective buyers are willing to go to beat out the competition.

While Dawn (Patty Wortham) and Tom (Andrew Friedman) are interviewed, Dawn pets a rabbit on her lap. A trainer brought the rabbit to the set and allowed it time prior to filming to acclimate to the actress and the enclosed residential location. The trainer remained just a few feet away from the animal at all times and removed the rabbit between takes to allow for "bathroom" breaks.

When Tom and Dawn open the door to their storage unit, two Chihuahuas scamper out. Later, Tom and Dawn each hold a dog while talking. These Chihuahuas were situated in the storage unit by their trainer, who closed the door just moments before filming. Both actors were introduced to the dogs beforehand and the trainer stood off-camera during filming to supervise the action.

The two horses seen in a corral at one property lived at that residential location. When Richard (Ryan Smith) swings a golf club and aims for the horses, the actor pantomimed this action; there was no real ball hit and the horses remained at a safe distance in their corral.

At a pet store, Dawn hovers over a rabbit pen and is then seen putting several rabbits in a large burlap bag. The next shot is of the bag on the floor; one rabbit emerges and hops off-screen. This scene was filmed in a real pet store and all background animals belonged to the shop. The rabbits Dawn stuffed into the bag were prop plush toys. Two real rabbits were placed just inside the bag on the floor at the last possible moment and one of them hopped out on its own accord. Crew members and the American Humane Animal Safety Representative on site acted as barriers to prevent its escape.

One of the film's running gags involves Dawn's favorite intimidation technique — leaving a dead rabbit for her unsuspecting victims. Production provided documentation that the dead rabbits used in each of these scenes were fake.