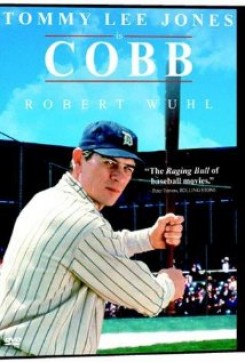 Cobb is the story of baseball legend Ty Cobb, known to fans as the "Georgia Peach." When sports writer, Al Stump, is summoned by the seventy-year old Ty Cobb to be the writer of Cobb's biography, he believes it will be an honor. Unfortunately, he discovers all to quickly that Cobb lives up to all the rumors which paint him as difficult at best and psychotic at worst.

Stump drives to Cobb's Lake Tahoe mansion to begin his biography and arrives as Cobb is firing his butler and firing a gun throughout the upstairs of the house. Upon entering Cobb's bedroom, Stump finds the legend in bed petting his hound dog. By this time in his life, Cobb is a very sick man, existing on a plethora of drugs and alcohol. In a fit of coughing, Cobb pushes the dog off the bed. He explains to Stump that he not only wants him to immortalize him in a book about Cobb's theories of baseball, but to also accompany him to the Baseball Hall of Fame testimonial dinner. For this scene, the dog was placed on the bed by the trainer in a sit and stay command and was not actually pushed by the actor, but responded to the trainer's command to come. Believing he is misunderstood, Cobb punctuates his conversation by shooting at a buck that he sees grazing out the bedroom window. After firing the gun several times, Cobb believes he has shot the deer in the throat. Stump however, believes he saw the deer run away. Later, Stump takes a walk just to get away from the lunatic behavior of Cobb and as he walks in the woods, he comes upon the deer. The animal is lying in the snow, dead from a bullet wound in the neck, just as Cobb had said. For this sequence, the scenes were shot in cuts. When the deer is seen grazing, a real deer was placed on the mark with food on the ground. A second deer was used when we see the buck run away. This deer was placed on the mark by the trainer and then called from off camera. A six foot fence was erected in the area to keep the deer from escaping into the surrounding woods. The animals were not present on set when the gun was being fired. For the dead deer, a taxidermied deer was used and fake stage blood was applied to the throat area. As the story unfolds, we find that Cobb is a man out of control, angry and erratic in his behavior. On the trip cross country to the Baseball Hall of Fame, the story of Ty Cobb is told in flashback and we learn why he was considered the most hated man in baseball. Ty would sharpen his spikes before games, brawl with the opposing team, steal bases and verbally insult other ballplayers. He was a terrific bigot and hated everything except his own view of the world. He was guilty of wife beating, game fixing, and excessive indulgence in alcohol and prostitutes. On the positive side, he was an outstanding ballplayer and an astute investor who saw the wisdom in fledgling products such as Coca Cola and General Motors. To escape his wrath, Stump would write the Cobb story as dictated to appease him, but by night he would write the truth. Sadly, Stump could not bring himself to ever betray Cobb and in the end he lies in his book to create the hero that Cobb wanted to be. Other animal action in the film is minimal. In one flashback, we see Cobb as he meets the presidents that served while he reigned as a baseball great. While being photographed with Calvin Coolidge, the president holds his pet cat in his arms, stroking it. When we see Cobb return to his hometown in Georgia, there is a dog sleeping on the porch of the house. In another flashback, which describes how Cobb's father was shot by his mother as a prowler, we see his father ride up to the house on horseback and tether the horse to a tree.