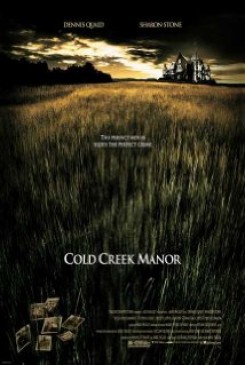 Grace (Sharon Stone) and Cooper (Dennis Quaid) decide that they need to slow their lives down a bit and move their family into a big estate in the country. The former owner, Dale, offers to help them fix the place up, but resents Cooper's interest in his family history. As they begin to fix the house up, they discover that this house has its share of secrets and maybe even some ghosts.

Mild live horse action, including a fake dead horse that floats in the pool in one scene. One scene of intense snake action and a simulated death of a snake. One scene appearing to put a deer in jeopardy was also simulated.

Grace and Cooper surprise their daughter, Kristin with a horse she names Chester. Stephanie, Kristin's friend, is waiting outside the house at an open horse-trailer holding the horse by its reins and petting it. Kristin runs inside the trailer and pets the horse. The girls guide the horse out of the trailer and walk it off screen. The trailer was an extra wide livestock trailer with lots of room inside. The horse was introduced to the actors ahead of time so all felt comfortable throughout the filming. Both girls had ridden before and had riding lessons from an experienced teacher before filming began. Later, we see Stephanie and Kristin riding horses. In one scene Chester is tied to a tree as Jessie and Kristin play hide and seek. Two trainers stood just off camera for all of these scenes.

Unfortunately, whatever evil lurks around this seemingly placid county home, surfaces to make Chester a victim. For the scene where Chester is shown floating dead in the family swimming pool, a fake horse was built and placed in the water.

A snake is swimming in the pool in one scene and Dale goes into the pool and picks the snake up. He carries the snake out of the pool and holds it up to show Grace and the kids. A trainer used a net to place the small Python in the pool. The snake was such a fast swimmer that two crew members stood on each side of the pool and using plastic paddles made some ripples in the water to slow it down enough for the camera man to catch on film. The trainer worked with the actor before filming began and showed him how to handle the snake. The actor picked the snake up and held it while he walked out of the pool, delivering his dialogue. The trainer worked with the young actor who played the young son, Jessie, so that he would be comfortable touching the snake. The trainer retrieved the snake from the actor after the scene was over.

Upon waking one morning the family discovers that snakes are everywhere in the house. There is a snake crawling on some plastic hanging from the ceiling, one slithering under the covers of Grace's bed, one under the refrigerator in the kitchen, one dangling from Kristin's closet and one on the floor by Jesse's bed. Trainers placed the snakes on the marks in the house and stood off camera to retrieve the snakes afterwards. Cooper opens a door and snake strikes at him and he quickly closes the door. A trainer placed the snake on its mark and cued it to strike as the door was opened. This was filmed separately and added into the film in post production. The family exits the house and one snake begins to slither out under the door, but Cooper hits it with a rock. The snake that falls from the ceiling is fake as is the snake that Cooper smashes with a rock. The refrigerator and the door were built by the production to allow a large space underneath it where the snake was placed comfortably.

Dale jumps in his truck and follows Cooper who is already driving fast. As the two come around a curve, a deer is standing on the side of the road and it appears as if Cooper hits it. After the two trucks come to a stop, the deer runs out from behind Cooper's car. The deer was very well trained and walked on a leash. The trainer walked the deer out to the side of the road which was closed off to traffic. The deer stood on its mark by the roadside while the trainer was hidden from the camera, still holding onto the leash. The car was driven at a very slow speed and the film was sped up in post production so it appears as if the car is speeding by. The deer was placed on its mark behind the parked car and the trainer held the long leash to guide the deer off camera.