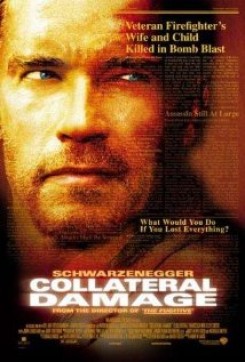 Heroic firefighter Gordon Brewer (Arnold Schwarzenegger) takes the law into his own hands when his wife and son are tragically killed in a terrorist plot against the US government. Rather than accepting his family's fate as merely "collateral damage," Gordon sets out to the jungles of Columbia to seek and destroy the people who murdered his family.

American Humane was contacted by the production for filming in Los Angeles, and AHA was on set to monitor a scene in which a snake is supposed to be forced down the throat of a character as a torture device. Trainers brought in 5 milk snakes to use interchangeably for this action. To accomplish this scene humanely, the actor that holds the snake was instructed on how to handle the reptile gently and a trainer was close-by to retrieve the snake after each take. Filming of the snake going down the man's throat was done at an angle so that the action was "cheated;" the snake did not actually enter the man's mouth.

The remainder of the animal action in the film took place on location in Mexico. AHA obtained reports from Production regarding how the action was achieved, but was not notified to be present on set during filming. After reviewing Production's reports, however, AHA believes that no animal was harmed, and is rating the film Believed Acceptable.

Other Animals on Location

Animals on location, including dogs, donkeys, and horses, were rented by Production from local ranchers living no more than half a mile from the location. The animals' owners would transport them to and from the set each day; no animal was left unattended. For the scenes involving explosives, all animals were removed from the set at least 45 minutes prior to filming. The reaction of the horses to the explosives was filmed separately from any actual detonations. Trainers cued the horses from off-camera to whinny.