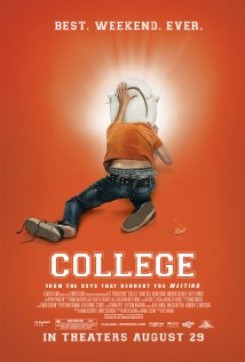 As part of a prank, frat boys tie the hands of Kevin (Bell), Morris (Covais) and Carter (Caldwell) in an enclosed pig pen. One of the pranksters opens a door to a shed inside the pen to reveal several pigs. He throws a firecracker nearby to get the pigs to run out of the shed and into the pen. As the pigs approach the young men, a man in a house nearby comes out onto his porch and begins to shoot at the boys, who jump over the fence and run away. This scene was filmed in several separate shots and edited together later. Pigs were placed inside the shed moments before filming began. The actor opened the shed door and the pigs ran out on their own as a natural reaction to the door being opened. As soon as the actor threw a fake firework with a lit wick a safe distance from the pigs, the scene ended and the flame was put out. A water-based fogger was used to make the scene appear smoky. A trainer placed a pig between one actor's legs, which were baited with food. The pig bit the food, making it appear as if the pig was biting the actor's groin. For the last part of the scene, the pigs and the actors chased each other around in the pen. Before filming began, squibs (mild explosive devices) were placed on the fence, and were triggered to go off when the man shot his gun. The pigs were never around gunfire.

The production provided documentation that the dead frog dissected during the opening credits was a prop.

American Humane did not monitor all of the pig action.