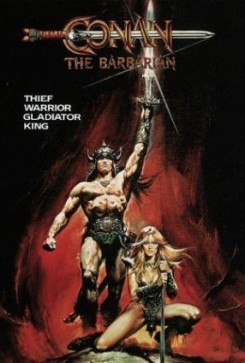 Conan the Barbarian is the epic tale of a child sold into slavery who, as a man, seeks revenge against the warlord who massacred his tribe.

In the film, a warrior kicks a dog aside in the street; a camel is struck and falls on its side; and horses are thrown into forward somersaults as a result of tripping wires. There are three visible horse trips, including a horse that falls into—and over—pointed stakes.

Since it was filmed in Spain, AHA was not contacted about the film and was, therefore, not on set during production. On April 12, 1981, Carmelita Pope, Director of AHA at the time, contacted Delores Marsans Comas, President of the Association for the Prevention of Cruelty in Public Spectacles in Barcelona, Spain. After investigating the rumors, Marsans Comas wrote that "Spanish laws regarding animal actors are non-existent and, unfortunately, it is frequent that producers come to Spain due to lack of legislation." AHA, therefore, rated the film Unacceptable and on May 14, 1982, organized a protest at the opening of the film outside of Hollywood Pacific Theater. AHA also asked thousands of its members to boycott the film and write to the producer. Over 6,000 letters of protest were received as a result.