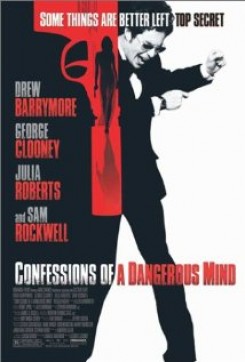 Confessions of A Dangerous Mind

Confessions of a Dangerous mind is based on the unauthorized biography of game show host Chuck Barris, who originated The Dating Game and The Gong Show. The story gives new meaning to the film industry term, hyphenate, meaning a multi talented individual. In the case of Barris he was a producer/song writer/game show host/and Assassin. As the film unfolds, the audience becomes aware of the covert double life he lived and the lives he altered.

In one flash back scene, an eleven year old Chuck overtly propositions his sister's friend Tuvia. The girl is a pretty, eight year-old who is sitting on the living room floor playing with a puppy. For this scene, the trainers placed the dog with the actress and she idly pets the dog as she ignores Chuck's advances.

As Chuck's life becomes more complicated, he succumbs to his secret double life. He is asked to travel to exotic locations and perform missions that ultimately lead to the demise of targeted international threats to national security. One such mission puts him in a third world country where livestock is seen being transported in the open bed of a truck. Trainers placed the livestock in the truck and they simply rode from point A to point B as the cameras rolled.