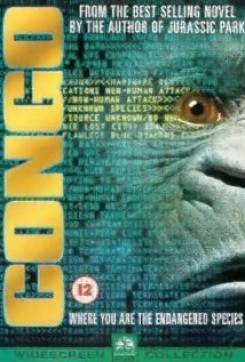 Over the opening credits of this unusual motion picture about a young chimpanzee named Amy, who has been taught to talk and will soon be returned to the wilds of central Africa, we see ostriches, lions, giraffes wildebeest and zebras in what appears to be their natural habitat. In reality, this footage was mostly filmed in Simi Valley in Southern California.

In a "make-believe" African jungle and City Of Zinj, created on a sound stage at Paramount Studios in Hollywood, an expedition discovers a place where human greed and the laws of nature have gone berserk — killer gray gorillas have been trained for thousands of years to destroy those who trespass into their territory.

A male primatoligist, a female hi-tech project genius and an evil entrepreneur become unlikely partners in a search for the legendary lost City of Zinj and its fabled diamonds from King Solomon's mines. They are investigating also an expedition team that disappeared mysteriously a few months earlier with no trace of what happened except for a gray blur on the computer screen that perplexed everyone at the corporate headquarters in the United States.

The primatologist is the guardian of Amy, a remarkable gorilla whom he taught to speak with the assistance of a sensor glove constructed of fine silver netting. Her "voice box" is in a collar on her throat. Amy speaks in a girlish voice bubbling with youth and enthusiasm. The primatoloist wants to return Amy to the wild. The hi-tech project leader has been sent by the CEO of her company to retrieve rare diamonds needed for state of the art communication technology that will save her company from bankruptcy. The nefarious entrepreneur wants only the diamonds for his own personal gain.

Once in the Congo, the young and unenlightened Amy, who was reared in a research laboratory, experiences her first encounter with a chameleon, huge jungle green insects and a frog. The chameleon, a three-horned 'Jack' from Africa, had been placed on a branch by the trainer and remained there while Amy looked at her perplexed. According to the trainer, chameleons are intelligent and very docile creatures. The huge green bugs were strategically positioned to be seen by the camera so that the actors could walk through the sound stage jungle into the City of Zing without harming them. Between scenes, Mr. Sylvester, the trainer, arranged for a room with lights in which the temperature would be maintained at 80 degrees for the green bugs welfare.

In one scene, Amy played by an actor in a gorilla suit, pushed the frog off the banana cooler. Blankets had been placed below, as well as artificial turf, so the animal would not be injured. The frog, who was not harmed in anyway, dropped only six inches.

A second expedition braves innumerable and overwhelming obstacles in the impenetrable rain forest, including treacherous terrain, raging rivers, and an earthquake, as well as an erupting volcano. As they struggle through the jungle, one of the members of the expedition team is attacked by a poisonous snake that he kills with a machete. This was accomplished using a live and dead snake. A real snake is seen moving on a branch. The live snake is replaced with a frozen dead snake whose head is cut off by the actor in a close-up with the machete.

In one scene there is an encounter with a hippopotamus on a lake at night in which one of the safari guides is grabbed by the animal and pulled into the lake. This was a mechanical hippopotamus.

Soon after the expedition enters the lost City of Zinj, they are shocked to discover that in the Congo they are the endangered species, as attack after attack comes from a rare species of killer gray gorillas. The legend of the killer ape is true! They find that the first expedition is all dead, killed by having their eyes and throats ripped out, and then their skulls crushed.

The gray gorillas are unusual in that they have malformed hands, tumors, gray fur missing in patches, liver spots, the occasional open sore, gigantic dog-like jaws and powerful propulsive legs. Accordingly this is caused by inbreeding with humans and vitamin deficiencies. All of these primates were played by humans dressed in gray gorilla costumes.

As the evil entrepreneur begins to gather up the diamonds he has found, the gray gorillas attack him ,constantly and ferociously until he is dead. One by one all of the second expedition is killed with the exception of the primatoglist, the project leader and the safari guide, who all escape by hot air balloon as the volcano erupts and destroys the City of Zinj.

On her own, Amy has escaped and meets two gorillas with whom she bonds. The primatologist, who taught her to talk, makes the decision to leave Amy in her natural habitat to live a normal life Amy waves good-bye with a smile of peace and happiness.