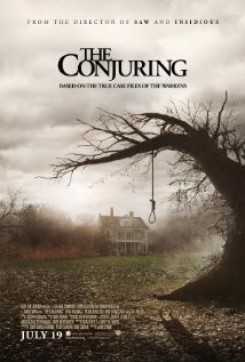 Based on a true story of a family encountering evil spirits in their New England farmhouse.

Happy to report that the American Humane Association monitored every scene involving animals in this upcoming horror thriller!

In the scene where the actors get out of the car and walk towards the house, but the dog stops refusing to walk inside the house, and the father tries to coerce the dog inside by grabbing his collar, trainers were off-camera and cued the dog just before entering the house to stay on the porch. Dog was rewarded with snacks after each take.

In the scene where the dog is chained to the post outside and barks up at the second story window, the trainer leaned outside the window and cued the dog to bark at him.

When the actress finds the dog lying down dead in the yard, production used a fake, stuffed dog, for which they provided documentation for. In a subsequent scene, where the kids find a dead pigeon in the same location as the dog, the props department also used a fake dead pigeon in this scene.

In the scene where the actress plays with a chicken in its coop, trainers placed the chicken in the coop, and instructed actress on how to interact with it.

For the scenes where the bird flies into the car window, birds fly against the house windows and the birds fly into the garage, this was all done through CGI.