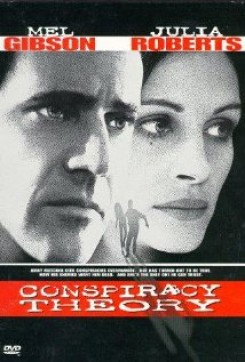 Conspiracy Theory is the story about Jerry, a paranoid New York City taxi driver, who believes that everything is a conspiracy. He even has his own newsletter describing some of his beliefs. No one takes him seriously, until he gets the attention of Alice, a woman working for the Justice Department, who decides that he might be telling the truth.

There is a scene where Jerry is in his kitchen and he sees a large bug in the sink. He grabs a spatula and hits the insect. Still wiggling, while stuck to the spatula, he pulls it out of the sink and puts it in a take-out container. A fake rubber cockroach was used. In another scene, Alice is sitting on her horse, petting him and later, jumping over a small fence. For this scene, a trained professional show horse and stunt double were used. Other animal action consists of a woman and her dog sitting in the back of a taxi cab, and pigeons, which were natural to the area, seen in the background at a park.