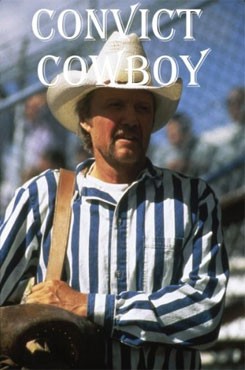 Convict Cowboy is a story about life on a prison ranch and the head wrangler, Rye Westen. Westen was once a rodeo champion but after a fatal brawl one night with a cowboy he was convicted of murder. He now runs the prison ranch. Life was pretty quiet until a new wrangler was assigned to him. Clay is a young, smart mouth cowboy who wants to work at the ranch instead of the prison kitchen. He will do almost anything to get there and doesn't realize the price until much later. After finally getting the job on the ranch, he finds he must earn Westen's respect, and that won't be easy because Westen is not used to having his wranglers assigned to him. It is not long before the kid learns that smuggling drugs for the prison drug cartel from the ranch is the price he must pay for his exit out of the kitchen. Clay wins Westen's respect and admiration because he doesn't back down from any of the challenges thrown his way nor does he complain about his treatment. Westen's respect means a lot to the kid, and he realizes that everything will be lost if Westen finds out he has been using the ranch for drug smuggling. Clay asks Westen to teach him how to bull ride and he does so well that the warden hears about him and decides to enter Clay in the prison rodeo along with Westen. The drug cartel find out he will be going outside the prison for a rodeo and they inform him that he has another big job coming. When Clay refuses to smuggle the drugs in , the drug boss in the prison threatens to kill Westen at the rodeo. Clay forms a plan and agrees to one more job. He delivers only part of the drug shipment to the boss of the cartel. The rest is to be delivered after he is sure that Westen is safe. This will give him some time to figure out how to explain to Westen his involvement with the drug cartel. His plan backfires, however, and Clay is almost killed when the drug boss orders his thugs to beat him up. Westen shows up after being told by a friend of Clay's, that Clay was in danger. Westen, along with Clay, defeat the thugs and in the end are the only two left standing. The members of the drug cartel are taken into custody while Westen explains to the warden what happened. Westen encourages Clay to ride the rodeo circuit when he gets out of prison. After taking Westen's advice, Clay starts working the rodeo and goes on to be the next champion rodeo rider that year.

Horses are ridden throughout. Clay is seen in several scenes on horseback. There are many scenes where we see prison wranglers riding in from a day in the fields and since this is a prison ranch there are always guards on horseback guarding the area. In most of these scenes professional wranglers were used as extra's in the shots. The rodeo scenes themselves were documentary footage. The close ups of the actors were filmed separately and edited in in post production. During the rodeo scenes you can see bulls in corrals waiting to be brought into the ring. On the ranch, horses are seen in the barn and corrals when not being used.