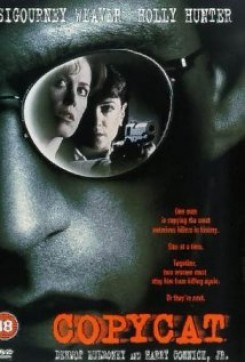 Copycat is a drama, set in San Francisco in 1994, about a serial killer. Dr. Helen Hudson is a forensic psychologist and teacher who travels across the U.S. giving lectures on serial killers. She also aids the police in investigations on murder cases, giving psychological profiles of the killers by studying their methods of murder. However, after being attacked by Daryll Lee, a serial killer she had testified against, she becomes agoraphobic. Thirteen months after her attack she is still living in seclusion when a series of murders take place and the pattern seems to be that of a serial killer. After contacting the police about the murders, two police detectives, M. J. Holoran and Rueben Goetz, pay her a visit. M. J. and Rueben try to convince the doctor to help them with their investigation, but she refuses. However, M. J. leaves behind a group of photos of the two victims that have been killed. She is hoping after seeing the photos the doctor will change her mind. Dr. Hudson does indeed examine the photos and finds a definite pattern to the murders. She calls the detectives back, telling them that their killer is a copycat murderer. He has killed the first two victims in the same manner as that of the Boston Strangler and Albert deSalvo. Dr. Hudson informs M. J. that the killer isn't done yet and that from what she has seen they can expect more murders to take place. She stays on the case, helping the detectives, and after two more murders are committed with the same M. O. as the Hillside Strangler and Son of Sam, the doctor realizes that he is following the same chronological order of the serial killers she talks about in her lecture series. She tells Rueben that the Son of Sam murderer used a V.W. in his killings. When the police check the Division of Motor Vehicle, they find a V.W. registered to a Peter Foley. Dr. Hudson matches that name to her student list from her lecture class thirteen months earlier and finds Peter Foley's name there. Later that same night, Peter breaks into the doctor's apartment, scaring her. However, before he can do any harm to the doctor, the police arrive and he escapes through a window. That night when the doctor goes to bed, she finds a present left behind by Peter. It is a book with a finger from one of his victims marking a specific page. The author is none other than, Daryll Lee, her attacker of thirteen months earlier. The next day the warden at the prison conferences her with Daryll through her computer. He informs the doctor that Peter had been writing to him in prison. Daryll said that Peter had been telling him how he was going to kill the good doctor. They now know who he is, but as the police arrive at his house, it explodes in flames. Peter's remains are not found amongst the dead with his wife and dog. Therefore the big question is, can they find him before he commits any more murders?

In one scene Peter is at his home and takes a drink to his wife in the bedroom. She is in bed along with their Chihuahua. The dog barks at Peter until he leaves the room. To get the dog to bark, another dog was introduced just off camera, and when the Chihuahua noticed the dog, he began to bark. When Dr. Hudson retires for the evening after Peter has been in her apartment, she takes her shoes off and a few ants are seen crawling on them. When the doctor is in bed she notices an ant on a file folder she picked up, and upon looking down at the bed she notices more crawling on the bedspread. She jumps out of bed, pulling back the covers, only to discover ants crawling all over the mattress and sheets. Upon closer inspection, she finds a book between the mattress and box springs with the piece of a finger sticking out, covered with ants. The police are later seen cleaning up the mess and one policeman is vacuuming the floor full of ants. To accomplish this scene, the trainer merely placed the ants on the bed and floor and after the scenes were over retrieved the insects. The police are at the scene attempting to collect evidence and clean up the ants and one of the officers is seen with a vacuum cleaner. This scene was shot in cuts. The policeman shown with the vacuum nozzle in hand was moving towards an ant and then the shot cuts away to the actors. The vacuum used was one normally used for collecting ants.