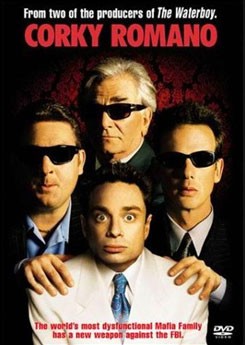 8 dogs, 3 cats, 21 hamsters, 1 boa constrictor, and 2 conures (a type of parrot) were featured in the chaotic scene at the veterinarian's office. All of the animals were introduced to their temporary owners beforehand, and were in fact healthy-their illnesses were only fictional. The grossly obese cat in the carrier was actually just a fake-fur fat cat suit (say that 10 times!), and when the cat is outside of the carrier, a real cat wore the lightweight and ventilated suit for very brief periods of time. The syringe that squirts liquid at the cat contained only water, and the spilled tea was not hot. Trainers cued the kitty from off camera with a clicker device and food rewards. When Corky appears to wrestle with the determined cat to get a bird out of its mouth, a trainer stood in for the actor to ensure that the cat wasn't played with too roughly. Also, the bird in the cat's mouth was fake, as were the hamsters that were tossed into the chaos by crew members from off camera. The real hamsters were sectioned off behind the actors, protecting them from the orchestrated melee.

Amidst all this confusion, a snake somehow gets loose and finds its way into Corky's pants. Although a fake snake was used for some of the action in this scene, a real boa constrictor was carefully fed by a trainer through a hole in the back of the actor's pants. The trainer instructed the actor on how to properly hold the reptile and pull it through gently.

2 German Shepherds named Drew and Reno shared the role of the police dog that plays tug-of-war with Corky over a brick of cocaine. Trainers cued the dog from from off camera to tug the brick-which was actually comprised of a non-toxic substance-and run away. A trainer also safely entangled the dog with the leash. The sparks from the fake pole were special effects added in during post production.

Later, as Corky is tortured by a group of skinheads, one of them holds back a vicious-looking, snarling, and barking attack dog. The dog was actually a very sweet spirited Bull Terrier. A trainer cued the dog to snarl and bark from off camera by tapping a stick on the ground and waving it in front of the dog. A testament to the dog's true disposition, it later licks Corky's face.

The role of the wiener dog that's catapulted by a sting operation explosion was shared by 3 Dachshunds named Stimpy, Freddy, and Turbo. Trainers cued the dog to "stay" and "come" on command from off camera. A trainer on a step-ladder gently tossed the dog onto a blanket held by 2 other trainers to make him appear to fly through the air. The dog safely landed on its feet. When the pooch must lay on its back, a prop was used for the scene. The fake dog had a device to blow air into its mid section, creating the illusion of breathing. The real dogs were not allowed to be close to the debris from the explosion, and a clear path was made for the dog's safety when running from point A to B. No explosives were fired when the animals were present. The several chickens that were caught in the midst of the "gunfire" were gently tossed one at a time into the camera frame by trainers off camera, who retrieved them after the scene was completed.