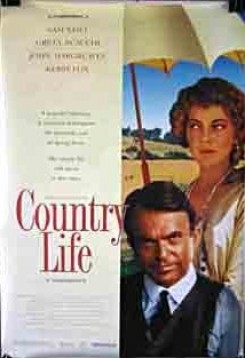 Country Life is a period drama set in Australia during 1919, just at the close of the first World War. The story revolves around the homecoming of the prodigal brother-in-law who, after having been away for over twenty years, returns to the estate of Canterbury and proceeds to disrupt everyone's lives. Alexander Voysey, world traveler and noted theatre critic and writer, is returning home to Australia after years abroad. He had left following the death of his first wife, leaving behind his daughter, Sally, to be raised by her maternal uncle, Jack, her grandmother and the housekeeper. Upon his return, we meet his second wife, Deborah, a woman who is half his age, quite beautiful and refined. She becomes the infatuation of many men, not the least of which is Uncle Jack and the local physician, Dr. Askey. Sally is in love with Dr. Askey and is delighted that her father requires much of the doctor's attention and frequent visits to Canterbury. The doctor, of course, is happy to visit since it enables him to woo Deborah which ultimately breaks Sally's heart. Deborah is given Sally's room and Alexander takes up residence in his former room where he can have privacy and write his book. Basically, the entire household is turned upside down to accommodate his rich acquired tastes. But the amenities afforded him by the economically beleaguered outback, ravaged by the crash, the war and neglect, are simply not enough. When he finally conspires to sell the family estate and ranch land to a greedy land company, the family reaches the final straw. Amidst the hubbub of argument and tempers, the decision is made that he and Deborah will leave Canterbury. As their carriage pulls away, we realize that everyone's life has been changed forever in the wake of this visit.

Animals in this film consist of sheep, a parrot, a white macaw, horses, a lizard, kittens, two kangaroos and dogs. There are two scenes in which we see Alexander and Deborah coping with the realities of Canterbury, a sheep ranch in the desolate Australian outback. In one scene, Deborah is shown how they butcher a sheep. The sheep is shown being skinned while hanging from its hind legs with the bloody skin then being tossed over the coral railing to dry. In another scene we see Jack shearing a sheep in a pen. In another scene, Sally is helping to herd the sheep across the ranchland and goes to rescue a sheep stuck lying down in a stream. As she tries to lift the sheep out of the mud, it appears to be either too heavy for her to manage or too unwilling to budge. The film cuts to another scene before we are able to see if she has any success moving the animal. In one scene, Dr. Askey is trying to speak with a love struck Jack who is taking out his frustrations on the parrots he believes to be ruining the apple trees. Jack is seen holding up a shotgun and then there is a puff of feathers and dust in the tree. Dr. Askey then approaches Jack holding what appears to be a dead parrot in his hands, although we never actually see a bird hit by a bullet. Earlier in the film, we see a bird in its' cage trying to reach out a claw to grab a tea biscuit left within his grasp. In another scene, Alexander has called a family summit under the trees, complete with fresh lemonade, and this same pet bird is seen in his cage. During the climactic argument between Jack and Alexander over the sale of Canterbury, Jack retreats to the house in anger. From the balcony, he watches the land baron arrive to finalize the deal with Alexander. Jack becomes incensed, raises his gun and shoots at him. He misses the man, but apparently knocks over the cage of his pet macaw. We see that the cage has fallen over and watch the bird escape the cage and then fly away. Throughout the film there is mild horseback riding, horses seen in corrals and drawing carriages and carts. Dogs are also seen as background and surrounding a drunken ranchhand as he and the dogs lay sleeping. In several scenes throughout the film, herds of sheep are shown as background atmosphere. Kittens are also seen in a close up cuddling their mother to give atmosphere to a scene in the barn. On a nature walk, where Dr. Askey is flirting with Deborah, they pass a lizard in the bush. He also shows her, through binoculars, two kangaroos as they fornicate. Country Life was an Australian production filmed in Australia. Therefore, AHA had no connection with the film. We made repeated attempts to contact both the Australian production company and the American distributor with our questions about how the animal action was accomplished.