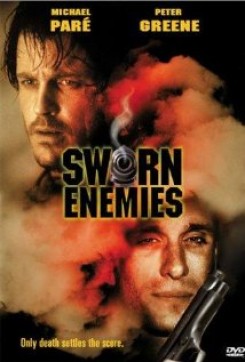 Coyote Run is an action adventure centering around the rivalry of two ex-soldiers who served together in Africa and now find themselves on opposite sides of the law. Pershing, who is a deputy sheriff in a small rural town in the northwest, has a severe alcohol problem. He is driven to sobriety when his old wartime buddy, Bosco, uses this sleepy town as the location for the assassination of several crime lords. Pershing's hunt for Bosco then becomes a personal vendetta. Pershing tracks Bosco, who now goes by the name of Clifton Saintclair, to Montreal where he finds that his old friend runs the city's underworld, controlling everything from cabbies to the police. Pershing is able to get to Bosco through an ex-girlfriend who both fears and loves the criminal. After much bloodshed, the two have a showdown in a cemetery and an old church which appears to now be used as a barn. Bosco has looked forward to this moment hoping that his old friend and mentor will become a new ally or a dead threat. Basically they are both lost souls seeking to walk that fine line between good and evil, friendship and justice.

Snakes are seen throughout the movie as the special pets of Bosco. In an early scene prior to the massacre of the crime lords, we see Bosco holding a very small snake wrapped around his hand. He holds the snake up and kisses it, then puts it into the pocket of his suit jacket. Later, we see a larger snake on Bosco's desk in his office in Montreal. He pets the snake as it slithers around in and out of his papers. The desk is in a very well appointed apartment which has another room filled with potted palms and large clear glass globes which sit on pedestals and act as aquariums. Snakes are in each of the globes. During the showdown in the cemetery, Bosco is thrown to the ground by Pershing. There is a shot of his head in the grass and a snake crawling next to him. Bosco picks up the snake and taunts Pershing with it. He then makes Pershing hold the snake, but Pershing tosses it into the air and shoots it. This scene was shot in cuts. A rubber snake was used for the moment the snake was seen being shot. In the final scene, we see Bosco lying dead with a snake crawling across his bloodied face. Whenever the live snakes were on set, they were accompanied by their owner/trainer.