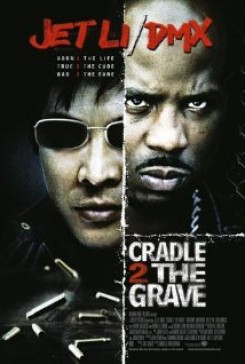 When his daughter is kidnapped and held in exchange for priceless diamonds, a gang leader, Fait (DMX), forges an unlikely alliance with a government agent (Jet Li) to rescue her. Their race against the clock to find the precious stones ultimately unravels a plot to distribute a deadly new weapon of war.

Two men fight in an alley near a chain link fence, that holds two Doberman Pinchers. The dogs are barking, growling and jumping up against the fence as the men continue to fight. When the gate breaks open, the two dogs run out and chase the men. One man runs up and over a brick wall and the dogs follow. The men open the back door to a parked car and one crawls through as the dogs follow him. Once the dogs enter the back seat, the men close the doors, trapping the two barking dogs inside. The part of the two Dobermans were played by Taz and Kelly who live together and know each other very well. A trainer placed the dogs inside the chain link fence and stood off camera using hand signals and verbal cues to get the dogs to jump up on the fence, bark and growl. The actors appearing to fight didn't distract the dogs at all. When the gate was knocked down by one of the actors, the trainer off camera verbally cued the dogs to run to another trainer off camera.

The next part of this scene was filmed in front of a green screen. A special platform that stood 4' off the ground was built and secured by crew members. The platform was carpeted to insure comfort and traction for the dogs. At the bottom of the platform was a padded mat for the dogs to land on. The trainers placed the dogs one at a time on a mark and had the dogs run fast and jump onto the platform and then off onto the padding below. Another trainer stood next to the platform to help guide the dogs. After this was edited and digitally mastered, it appeared as if the dogs chased the two men up and over a wall.

For the next part of the scene, the dogs were well rehearsed before filming began. A car was parked at the curb and all traffic was closed off to the street location. A trainer stood off camera and released the dogs after the actors had a head start running towards the parked car. The first actor ran up to the car and opened the back door, climbed through the car and exited the other door, leaving it open. The dogs followed the actor because they had been taught this action and because the actor has some treats in his pocket. Once the dogs entered the car, the doors were closed and the dogs remained inside. One trainer hid in the front seat of the car while another hid behind the car to help direct the dogs. After the scene was over the dogs were rewarded with treats and water.

Another fighting sequence takes place in a room that has a large aquarium in it. As the men fight, one man's beaten face is held against the side of the aquarium. Later that same man is lying dead inside the aquarium. An aquarium supply store supplied the tank and the two dozen various tropical fish that were used. The owner/handler of the fish was on set everyday to maintain the aquarium and oversee the action. Some water was drained from the tank to make room for the actor and with the help of the handler and the director, the actor entered the aquarium. The fish seemed to ignore the actor. Puddles of water were placed on the floor by crew members to make it appear as if the water spilled out from the aquarium when the actor was put in the tank.