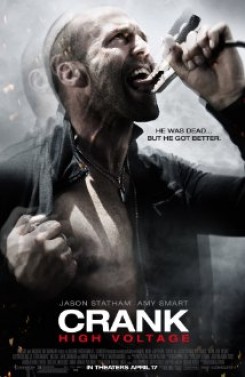 When Chev Chelios (Jason Statham) wakes up on an operating table to find that his heart has been replaced with a battery-powered device, he learns the only way to stay alive is to keep his transplant jolted with electricity until he can find the men who have taken his heart hostage.

At a race track, horses are seen in and around the track, with and without jockeys on their backs. Horses race down the track while Chelios (Jason Statham) and Eve (Amy Smart) are lying on the track. One horse jumps over them, and from their point of view, the horse's underside is seen in mid-jump. The rest of the horses continue to race around the couple. This scene was filmed in separate shots. Horses were filmed milling around the racetrack before the race, with trainers nearby and in costume. For all the horseback riding, all horses were ridden by experienced stunt riders who kept the animals a safe distance from each other. For the jumping scene, a specially trained jumping horse was well-rehearsed and conditioned to perform this action, and it first jumped over dummies numerous times, then over stunt people. A camera was also placed on the track for the horse to jump over, to achieve the point-of-view shot, and the horse's unusually large genitalia in that shot was computer-generated.

During a fight, koi fish swim in a pool in the background. Then a man's severed head is thrown into the pool. Crew members gently tossed the nontoxic head prop into the pool while trainers used nets to guide the fish in certain directions. The pool water was maintained at the temperature and environment the fish were accustomed to.

For a scene in which a ferret is briefly shown licking itself, trainers placed the trained ferret on its mark on a comfortable pillow, smeared baby food on a prop that looked like part of the ferret to entice the animal to lick it, and put it next to the ferret. The ferret was rewarded with food and retrieved immediately following this brief action. The ferret thrown into the koi pool near the end of the film was a prop.

A dog in a park is wearing a shock collar, and two men zap him several times when he barks. The dog then lunges at a policeman and bites the man in the crotch. This dog was a specially trained aggression dog, trained to "attack" on command and bite at a bite sleeve or similar piece of padded clothing. The collar was a prop that was not actually electrified and the dog was never shocked. The barking and reaction of the dog was cued by an off-screen trainer. The of police officer who was attacked was a costumed trainer who cued the dog to "get" him — this action was part of a training technique that the dog was very accustomed to. The trainer then cued the dog to bite the padded portion of the stunt suit.