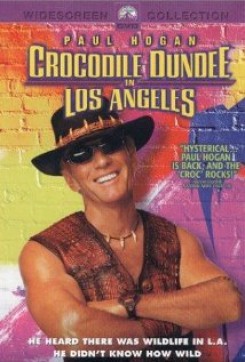 The third installment of Mick Dundee's outback adventures takes the fearless croc wrangler to the most treacherous terrain he has ever encountered: Los Angeles, California. There he must battle the two-faced monster known as the movie studio, while simultaneously wrestling with the task of raising his young son, Mikey.

The beginning of the film takes place in Australia, and sweeping camera shots capture images of outback wildlife: boars, iguanas, kangaroos, giant birds, and a Komodo Dragon. The animals in these shots were filmed in their natural habitat, and were not manipulated in any way for the film. While out croc hunting on a small boat, Mick places a giant slab of meat on the end of a stick to bait the menacing reptile. The hungry croc not only takes the bait, but chomps the entire boat in half as well! The scary croc was actually animatronic-no real animals were used in this scene. Still in the outback, Mick displays his command over a wild boar. He mysteriously cues the boar to sit by merely looking at it a certain way. Mikey is impressed with his dad's animal prowess. The animal in this scene was a Russian Boar, also featured in the recent film Hannibal. A trainer cued the big pig to sit while the actor's action was shot separately. The two actions were edited together in post production. At home, Mick's son plays with a baby kangaroo while Mick tries to conceal a renegade tarantula under his hat. Trainers retrieved the kangaroo and tarantula after each take, and ensured that they were safe during filming. The spider was not actually inside of Mick's hat when he places it on his head. Finally in Los Angeles, Mick and son have an LA freeway adventure-they rescue a cowering skunk from the side of the road, inadvertently causing traffic pandemonium. The freeway area was completely blocked off for filming, ensuring that all of the actors-both human and animal-were safe from traffic. The skunk was a 1 year-old neutered and de-scented male named Oreo. Trainers held Oreo on a leash with a clear plastic restraint attached, and placed him on his mark in the grass. Food was used to get Oreo to look in a certain direction, after which he was rewarded with the treat. Later, Mick's son has an encounter with an unwelcome visitor in his classroom-a rat. The small rat scurries across the schoolroom floor and Mikey throws an eraser at it, effectively kn ocking it out cold. He then lifts it up by its tail and carries it out of the room. The role of the rat was shared by two 2 1/2 year-old male rats. Their action consisted of running from point A to point B, motivated by a treat-wielding trainer. The rats were not actually hit any flying erasers, and a stuffy was used when the boy picks it up by the tail. Soon it is Mick's turn to save the day. After infiltrating a movie set, Mick inspires a chimp named Kiki to perform its acting duties. The chimp holds the croc man's hand and hugs his leg as he leads the primate into a cage and hands it a cup. The chimp's real name is Ellie, and trainers cued the animal from off-camera during filming. The finale of the film involves a scene with a lion and lioness. While Mick tackles the bad guys, a lion and lioness emerge from the back of the movie set and growl, slowly approaching the bad guys. Mick takes control of the situation and commands a lion to sit, then leads both into a cage nearby. Trainers released the lions, which were trained to stop on a mark and growl. A trainer called the lions into the cage and they willingly obliged. Finally, the croc at the wedding was animatronic.