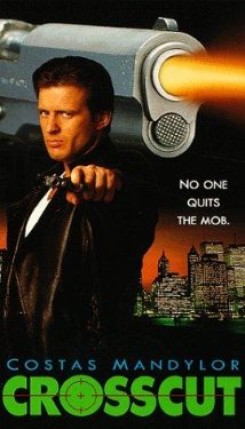 Crosscut is a drama about Martin Nicosia, an organized crime bagman in New York, who kills Connie Trentini, the mob boss's son. Martin is forced to flee for his life and he ends up in Overstory, California, a small logging town. While Martin is adjusting to his new life as a logger, the New York mobsters are searching everywhere for him. When they find Martin, a gun battle ensues and the citizens of Overstory, who once harassed him, pull together and help Martin kill the mobsters and start a new life.

In one scene, the mobsters are holding a man's foot in a cage with rats in it. There are also a few rats walking just outside of the cage. This scene was shot in cuts. The rats were provided by a local pet store. An owl is seen in several scenes. In a few scenes, he is seen in the rafters on the porch as he "whoo's," and also seen being taken down from the rafters and put in a cage. When in his cage, the owl just sits on his perch. Another owl is seen sitting in a tree before flying away. The trainer placed the owl on his mark and on cue the animal "whoo's" or flys from A to B. There is a fishing scene in the film where one of the actors supposedly catches a fish. The fish is seen jumping on the rocks for approximately two seconds, then the actor picks it up and puts it in a wicker basket. This scene was shot in cuts. Twelve live fish and several dead ones were obtained from the Fish & Wildlife hatchery. Dead fish were used for all scenes where the fish were handled by the actor. For the segment where the fish is supposedly caught, a line with a weighted bottle was placed in the water to simulate the fish tugging on the line. No fish was hooked or kept out of the water for any length of time except to transfer from one container to another. At the completion of filming the fish, indigenous to the area, were released back into the stream. In one scene a deer is seen eating in the woods for a split second. The deer was supposed to bound away, but the deer was so calm, the trainer was unable to cue the deer to move away, so they filmed the deer "as is", performing naturally in the woods.