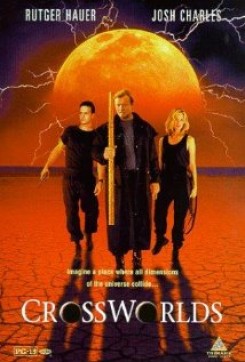 Crossworlds is a film about Joe, an average college student, unaware that he is in possession of a crystal that holds special powers when put into a magical scepter. The person that possesses both the scepter and the crystal can take control of the different dimensions that exist in the outer-worlds and be the sole ruler. Joe's simple world, as he knows it, changes dramatically after he sees a beautiful girl at his friend's annual party. While at the party, Joe sees Laura and when he makes his way towards her she disappears. Later, while Joe is sleeping, Laura appears again and trys to steal the crystal worn around his neck. The crystal was a gift from his father given to him at his fathers' death. When Laura is about to explain what she is doing there, she hears a noise and notices a raven sitting outside Joe's window. In the next instant the chaos starts as men with machine guns start shooting at the couple as they try to escape from Joe's apartment. Laura eventually explains to Joe why everyone is so interested in him and the crystal worn around his neck. After linking up with A.T., a former freedom fighter from Laura's dimension, the action really starts to get wild as Joe is taken from one dimension to another. Laura, Joe, and A.T. are trying to get the scepter and crystal back to Laura's dimension to save her world from the evil clutches of Ferris, a powerful sorcerer. Joe finds himself fighting a battle against good and evil as he is drawn into a bizarre parallel world.

In one scene, a raven is seen sitting on a tree branch outside Joe's bedroom window as he and Laura are talking. The raven is then seen flying away. There are a few other scenes where the raven is seen either sitting on a fence post or a rock. This was trained raven. There is also a scene where A.T. is captured by Ferris and while sitting in a chair, two Dobermans run towards him. The dogs bark and snarl at A.T. as they sit one on each side of the chair. They were following their trainer's commands. In two other scenes Joe sees a man in the desert riding towards him on a horse. For this, a stuntman rode his own horse in both of these scenes. Doves are also seen flying off into the distance.