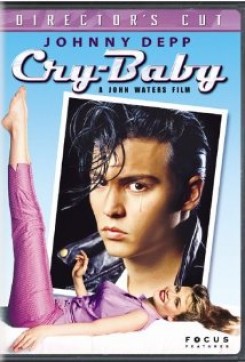 Cry Baby is a 50's love story involving two high school kids from opposite sides of the track. This film has a variety of stars such as Polly Bergen, Joey Heatherton, David Nelson, Traci Lords, Patty Hearst.

In one scene, Cry Baby's mother shoots at a Woodchuck. She misses. The Woodchuck jumps and runs away. This scene was filmed at two different times. They filmed the actress shooting, then later filmed the Woodchuck running from Point A to Point B. A small charge was used near the Woodchuck to appear to be a bullet. Another scene where two gangs are in their cars playing chicken, one cars swerves to miss and runs into a chicken coop. This was done in two takes using a shot of the coop with chickens, then another take with the car running into the coop. At this time the chickens were not anywhere near the coop. After the car runs into the coop, they place live chickens on and around the car and coop to appear that the car ran into the coop with chickens. There is a scene where Cry Baby escapes from jail. He falls down a sewer into a pile of trash and garbage. He is sitting in the trash with some rats.