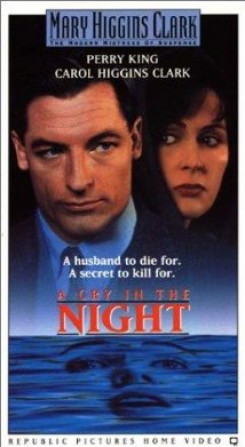 Cry In The Night

Cry In The Night is a suspense/thriller about a man who is completely obsessed with his deceased mother. Jenny, who has just been recently divorced, is a manager of Kruger's Art Gallery. She makes a modest living, which she uses to support her two young daughters, Beth and Tina. One day there is to be a big art show and sale at the gallery. Jenny finally meets the owner of the gallery, Eric Kruger, who is also an artist. Eric is immediately smitten with Jenny and after a whirlwind romance, Eric convinces Jenny to marry him. After the wedding Jenny packs up her daughters and their belongings and prepares for their move to Eric's home in England. Things are wonderful for this new family for some months. Eric dotes over Jenny and the children, lavishing them with love and expensive gifts. Jenny becomes a little concerned though when she starts to notice that they never have any friends over, and for one reason or another, Eric always has some kind of excuse why Jenny should not go anywhere or do anything without him. As time passes, this becomes more and more apparent, with Eric becoming hostile when questioned about it. He finally takes Jenny's car keys from her, forcing her to stay on this huge, lovely Estate, which has now become her prison. One day Jenny borrows the keys from one of the hired hands and goes into town to meet with Eric's best friend, Carl, hoping that he may be able to shed some light on this perplexing situation. Carl explains to Jenny that she looks exactly like Eric's mother, of whom Eric was completely possessive. It seems that his mother died in a terrible freak accident when Eric was a young boy. Little does Jenny know that Eric has followed her and is now convinced that she is having an affair with his best friend. Within a matter of a few days, Carl ends up dead, also involved in a freak accident. A few days later Chris, Jenny's ex-husband, who was on his way to see Jenny and the girls, winds up in a similar freak car accident and dies. Jenny is beside herself, and Eric is trying to convince her that she had something to do with these "accidents", as she is known for walking in her sleep. A month later Jenny makes a visit to the Doctor's office where she finds out that she is pregnant. She goes home with the wonderful news, but when she informs Eric, he is more than a little displeased, as he thinks the baby is not his. After the birth of their son, Eric Jr., Eric goes to the hospital and has the name of the child changed to Chris, the name of Jenny's ex-husband. Jenny becomes hysterical and must be sedated. While under the effects of the drug she hears muffled sounds coming from the baby's room and investigates, only to find that the baby has been suffocated. The question is, did Jenny do these horrible acts, or is she and her two daughters in mortal danger?

There are two violent animal scenes depicted in this film. In one of these scenes Beth and Tina's new puppy wanders into the Kruger family's cemetery. He is sniffing at one of the grave stones when, from behind a tree, Eric aims his hunting rifle and shoots the puppy, who falls over dead, blood covering the side of his little body. This scene was shot in many cuts. You never see the puppy actually being shot, nor was the puppy around any gunfire. A small string was loosely tied around one of the puppy's hind legs and his wrangler, who was out of camera range, tugged the string, causing the puppy to fall over onto his side on the grass. Stage blood had been applied to the puppy's fur. The puppy was never actually harmed in any way. The sound of the gunshot was added in post production. In the other scene, one of the hired hands is in the stable tending to the horses when one of the horses rears up and starts trompling the boy under his feet. One of the other men comes to the boys rescue and shoots the crazed horse. The horse rears up, whinnies, and then falls over dead. This scene, too, was shot in numerous cuts. A trained rearing horse was used for this scene. When the horse is trompling the boy, you only see the horses legs and the boy's face. This was accomplished by using two fake horse's hooves with one of the prop men moving them up and down off camera. The horse then did a lay down on his trainer's verbal command. The man never fires the gun when the horse is present. The gunshot sound and horse whinnies were added in post production. Horses and ponys are also seen in and around the stables milling about as atmosphere. One is also seen pulling a carriage and another is seen being fed an apple.