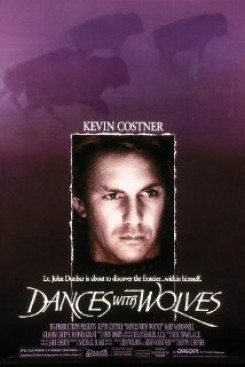 After the Civil War a Union soldier, Lt John Dunbar, requests a transfer to the western frontier. He's a celebrated war hero who made a suicidal ride across Southern lines and he now has a strong yearning to experience the disappearing frontier. The army grants his request and gives him command of a remote outpost. When he arrives, he finds the outpost deserted. Instead of returning, he remains, with only his horse, Cisco, for a companion. John keeps a journal while he maintains his lonely command. He writes about the wolf who pays him a visit each day. He names the wolf "Two Socks" and gradually man and beast form a close bond. He knows a Sioux tribe is aware of his presence and he decides to make contact with them. At first he is rejected, but the Indians become curious about this man they call "Dances with Wolves" and they begin a relationship that ultimately ends with John being adopted into their tribe. John also finds the love of his life when he meets a white woman who has been raised by the Sioux. Kevin Costner infuses a rare blend of masculinity and sensitivity in Dances with Wolves/John. Through his journal we observe the tragic plight of the American Indian as their way of life is brutally destroyed by an encroaching "civilization". It becomes painfully obvious who the real savages are when the Indians reverence for life is countered with the wanton destruction of the white hunter.

There is some form of animal action in nearly every frame of this epic film. The production company went to great effort and expense to stage realistic animal scenes without harming the animals. There is a huge buffalo stampede and hunt, which was partially achieved with the use of fake and mechanical buffalos. The cost of construction of these 23 fake animals was $250,000.00. Thirty-five hundred buffalo were used for the stampede. Some buffalo had arrows attached with clips to their fur to give the impression that they had been struck by arrows. The fake buffalo were run on tracks and then caused to crash and fall to give the impression of buffalo going down. Other fake buffalo were tossed out of the back of a truck and the cameras recorded their falling on the ground. One buffalo charges at a young Indian girl. It was actually a pet buffalo coming to collect an Oreo cookie for which he has a special yen. This scene was filmed in cuts. The buffalo that is shot and on the ground is a mechanical buffalo that raises its head and then is "shot" again. The buffalo liver that is cut out of a buffalo was actually made of jello. It took eight days of filming buffalo to get four minutes on screen. The scene was shots in cuts and the fake and real buffalo were mingled in foreground and background and filmed through a haze of dust. Where a buffalo and a horse collide it is actually a taxidermied buffalo head being held by a man. There is a heart-wrenching scene where the carcasses of dead buffalo lie strewn across a field, these buffalo were supposedly killed and skinned and their tongues removed by white hunters who left their carcasses to rot in the field. These realistic looking carcasses were actually made of foam latex. All horse falls were performed by trained falling horses. When Cisco is ambushed and killed he is merely doing a lay down and stage blood and special effects were used for the gun shots. The bloated carcass seen lying on the ground was fake and the vultures observed from a distance on the carcass were mostly fake mingled with three real vultures. "Two Socks" was portrayed by two wolves named "Teddi" and "Buck". Since nether Teddi nor Buck howl, a third wolf was used at the end of the film to howl in the wilderness. When "Two Socks" is shot and killed the wolf merely has a tether on his lower body. They filmed him attempting to stand up which creates the illusion of his being shot in the hind quarters. A taxidermied wolf was used to portray the wolf after he had died. Dead animals are seen at various times throughout the film. Dead animals hanging in a western village were actually road kills provided to the film company by local highway authorities. A dead elk submerged in water was supplied by a taxidermist. The dead dogs that are seen after the Pawnee raid were supplied by the local animal shelter. The dogs had been euthanized at the shelter because of illness. The production company respected the Indians reverence for the eagle and whenever eagle feathers were used they were fake feathers.