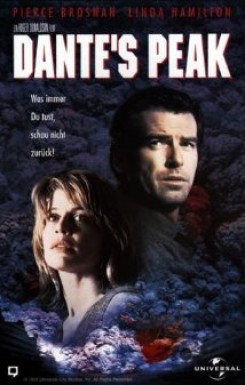 Dante's Peak is a film about Harry Dalton, a volcanologist, who is sent to Dante's Peak to investigate some minor volcanic activity there. While conducting routine test on the mountain, Harry along with Rachel, the mayor, and her two children, discover two dead bodies lying in a natural spring. The couple is believed to have died of severe burns to the body from the escalated water temperature of the spring. Harry immediately calls in a team from the U.S. Geological Service to officially chart the volcano and its activities. Unfortunately, no one, not even Harry's boss will believe him when he tells them that the volcano is about to erupt.

A dog is seen throughout the film with the children and their grandmother. The dog is seen walking or running from A to B with the actors or sitting in a vehicle while driving down the road. There is a scene where the group is making their way through the volcanic ash when the dog is seen standing on a rock above the road. Harry drives the truck close to the rock and the dog jumps the short distance into the bed of the truck and through the back window of the cab. This scene was shot in cuts. The ash seen around the area is actually ground up paper and the rock the dog stands on is a prop with fire bars attached which produce non-toxic smoke. Any fire or smoke seen in close proximity to the dog was computer generated. As an additional safety precaution, the window of the cab was padded and also the bed of the truck. A fire Marshall was present on set at all times. The truck was moving at approximately three miles per hour. A non-toxic make up was used to give the dog the appearance of a sooty look. The trainer placed the dog on his mark and used verbal and hand signals to cue him. Trainer #1 was lying in the bed of the truck holding the dog. He then released the dog to climb into the cab. When the dog is seen looking down at the truck barking, a trainer placed food on the rock and used verbal commands to cue the dog to look down into the bed of the truck. Later, when the group is in the mine shaft, the dog is seen jumping through the broken out window shield, following the children. Trainer #1 at point A, released the dog to trainer #2 waiting outside the truck at point B. The debris that is seen falling was timed to fall after the actor and dog cleared the area. Other animal action consists of dead fish seen floating in the river after the volcano erupts, two dead squirrels seen lying on some rocks, and a flock of birds that fly out of some trees near the spring. The fish used were rubber fish made by the prop department and placed in the water. The squirrels were taxidermic squirrels purchased by props. There are also two horses seen at the beginning of the film. One horse is being ridden by a man down the street during a volcano eruption and another one is seen being lead by a man when it becomes spooked by all of the activity going on around him. The horse slightly rears. A stunt wrangler rode the horse. There is also a little girl seen sitting on a front porch holding a cat when Dante's Peak starts to erupt.