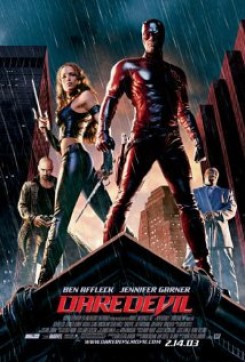 An accident leaves young orphan, Matt Murdock, blind. As he continues to grow, his other four senses begin to function with superhuman sharpness. Years later, he becomes a well respected criminal attorney. When his day is done in the court room, Matt takes on a secret identity as "Daredevil", the masked avenger who patrols the neighborhood of Hell's Kitchen and New York City to combat the injustice that he cannot tackle in the courtroom.

During the opening credits a rat crawls on the wet ground. Some smoke appears and the rat disappears. This was done with computer graphics. A real rat was not used. However there are two scenes in the film where real rats were used. As Daredevil walks down that same alley, three rats scurry away. Later, in another scene, as the character Bullseye is being chased, he runs up to a rooftop where he encounters a rat. Both of these scenes were accomplished in the same way. A trainer released the rats from a release cage and another trainer stood off camera using a buzzer to get the rats to walk in the direction needed. That trainer also had a cage with some food for the rats to return to.

As Daredevil runs on the rooftop amidst the clothes hanging on a clothes line, some pigeons fly up in front of him. It is supposed to appear as if our superhero ran into a pigeon coop, although the coop is not clearly seen. Trainers held the pigeons off camera and gently released them. Since the birds had their feathers clipped, they flew to the ground and were easily retrieved. Clipped feathers grow back enabling the birds to fly again.

If you look in the background you might be able to spot some dogs being walked by extras. Trainers handed each of the actors a leash and stood off camera as the actor and canine followed the director's cues.

The bats that fly into the church during a scene where Daredevil is fighting and the fly that buzzes around Bullseye as he lies bandaged up in the hospital and later one that appears to be stabbed to the wall are not real. They were computer generated.