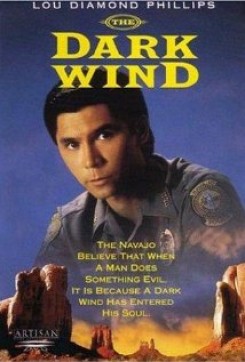 Dark Wind is the story of Jim Chee, a Navajo policeman, and how ancient beliefs crop up and become part of a drug smuggling operation in New Mexico. Jim happens to be on the scene when a plane carrying drugs crashes. When he goes to report the accident, the drugs mysteriously disappear and Jim becomes the main suspect. Jim and Cowboy, a Hope policeman from the next county, do their own investigative work to try and prove Jim's innocence. In so doing they become involved in murder, drugs, and the mystic powers of Indian rituals.

Jim has a pet cat that is seen in two scenes eating and lying on the bed with Jim. All other animal action is background consisting of sheep, geese and chickens on a farm in their own habitat.