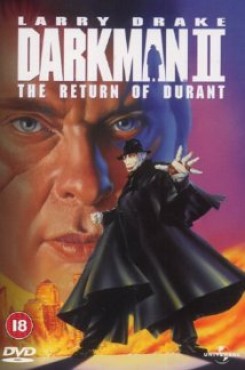 Darkman II: The Return of Durant

In the first installment of the Darkman saga, a scientist, Dr. Westlake, working in his lab on the formula for synthetic skin is brutally attacked by mobsters led by a crime kingpin named Durant. When they set fire to his lab, Westlake is burned beyond recognition, but survives. He returns to what is left of his lab where he applies the synthetic skin to himself and vows revenge on his attackers. Since the synthetic skin dissolves in daylight, he must seek his revenge in the shadows as "Darkman." He believes he has succeeded when Durant's helicopter explodes with Durant on board. In this second film, Darkman II: The Return of Durant, we find that the evil crime boss has survived the crash only to begin killing again.

Animal action is minimal in this sequel. In one scene, Westlake plays with a remote control mechanical mouse which seems to peak the curiosity of his cat. In a subsequent scene, mobsters torture another scientist. In this process, one thug reaches into a jar of what looks to be frogs in formaldehyde, pulls one out and brings it close to the scientist's badly burned face. Later, when the scientist's body is discovered, there are several dead frogs from the jar laying on the floor. For this scene, plastic frogs were placed in colored water resembling formaldehyde. The frogs on the floor were also plastic props.