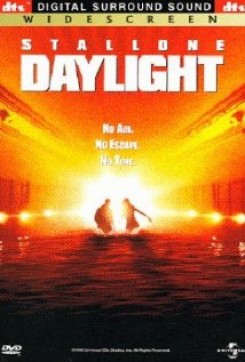 Daylight is a film about a traffic accident during rush hour that causes an explosion, sealing off a tunnel from New Jersey to Manhattan and trapping everyone inside. The only hope of getting anyone out alive is for Kit Latura, an ex-Emergency Medical Services chief, to journey through the unstable ventilation system of the tunnel and find a way out. After making his way through the ventilation system, Kit finds himself trapped inside along with a handful of survivors. Kit and the group battle rising water and hypothermia for several hours before he successfully leads them to Daylight.

A dog is seen throughout the film. He is seen in several scenes being walked on a leash and riding in a car. After the explosion, the dog is seen walking through the water, being lifted onto the hood of a vehicle, swimming in the water etc. Fire and smoke is seen in the tunnel in various areas however, the dog is not seen in close proximity of either. There is a scene where everyone had to swim under the water into an abandoned area of the tunnel for safety. The dog is put into the water and is supposedly swimming to the room. However, when the dog does not arrive he is presumed drowned. Much later, he is seen swimming through the water and Kit picks him up, putting him on some steps where he runs to his owner. After arriving safely, everyone hears a loud rumble and water starts rushing into the room. To the horror of the women, a large number of rats come rushing in with the water, crawling up the steps and all over the room. The rats start running towards a large crucifix hanging on the back wall. When Kit sees them start to disappear behind the crucifix, he realizes that there must be a way out. Surrounded by rats at his feet, Kit pulls at the stones in the wall and uncovers an opening. This scene was shot in several cuts. The film was shot at Cinecitta Studios in Rome Italy. A tunnel was built with an entrance on a sound stage with 16 tanks of water which enabled them to flood the sets.