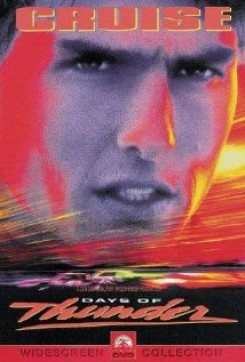 Exciting racing sequences distinguish this action-drama about racecar drivers. Cole Trickle is a talented, but green, novice driver. He convinces the legendary Harry Hogge to coach him with the goal of winning the Daytona 500. Harry gave up racing to avoid the investigation of a racing accident and he now builds race cars. When Cole suffers a brain concussion as a result of a race crash, a romance develops between him and his beautiful doctor. The story also explores what drives the men who race the cars.

Animal action is minimal and the animals provide mostly atmosphere such as a pet dog that's present in several scenes. An unfortunate accident occurred during the filming of one scene that involved unscripted animal action. Two cars were racing against each other on a Daytona Beach. There were seagulls on the beach, and in order to get a shot of the gulls taking flight as the speeding cars approached, the film crew scattered food on the beach to attract the gulls. As the cars approached, some of the gulls were hit resulting in the death of 2 gulls. A cruelty investigator from the Halifax Humane Society concluded that "although the film crew was grossly negligent in the luring of the birds to achieve the desired effect, I do not feel that the intent to commit the injury was deliberate." Although the production company used poor judgment in luring the gulls with food, there was no deliberate intent to harm the birds and what resulted was an accident.