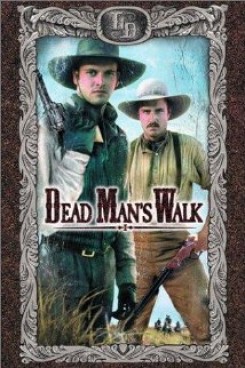 Dead Man's Walk is a film about the early years of Gus McCrae and Woodrow Call, the two characters created by Larry McMurtry in his novel Lonesome Dove. The story chronicles their life as 19 year old Texas Rangers under the command of Caleb Cobb. Their goal is to take Santa Fe and declare New Mexico part of the Texas republic.

There is a scene where a woman pulls a snapping turtle out of the water and swings it around in front of some men sitting at a campfire. The turtle is then seen lying on his back when the women picks it up and it's legs are seen wiggling. Later she is seen throwing what looks to be a one of the turtle's legs at the men. There is a scene where a horse is shot and he is seen lying down, not moving. In another scene, a herd of buffallo are seen running across the prairie and on in particular is seen with a spear on his back and, being pursued by two indians and three white men on horse back. The buffallo and his entourage run through a camp. One of the men shoots the buffallo and he is seen lying on the ground, presumable dead. This scene was shot in cuts. The actual shooting of the buffallo is not seen. Some wagons are seen flipping over during a chase seen, however, the horses are seen escaping any harm. In one scene, some Indians are seen chasing Call when they come upon a snake. There is a scene where men on horseback are surrounded by fire and one horse rears, another bucks, and one falls from a cliff. In another scene some Indians are seen throwing rattle snakes down at a man on some rocks below them. The snakes land at his feet and he begins shooting at them. A young buck comes into view and a man is seen shooting at him. Later a bucks head is seen lying dead on the ground. There is a scene where a Grizzly is seen standing and supposedly swatting at a horse and the horse falls. Other animal action consists of two dead carcus seen in the desert, oxen in a village being lead and two oxen pulling a cart of prisoners, dog A to B, a snake crawling out of a box, a goat outside a cabin, a woman carrying a snake and a woman seen with a snake around her neck, as she rides A to B on her horse.