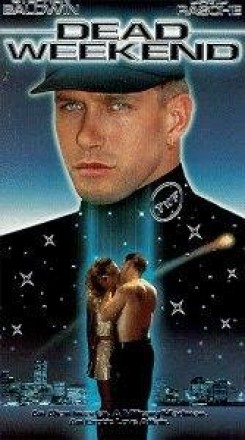 Dead Weekend is the story of a city in the future set in a militaristic environment. The True World Forces are looking for an alien in their midst. Additionally, the commander alerts the population to an earthquake evacuation of four million people as a phony way to have martial rule and kill street gang members on sight. The violence in the film is contrasted by Weed, the hero, and his discovery of the female alien while on patrol with his buddies. He doesn't let his buddies know he has seen her and slips out of a cafe. He takes champagne and food with him. After very little talk, they drink and have sex. The story moves from there to a hotel, to his place - sort of a chain of different locations for sex scenes. The twist is that in each sex scene Amelia changes into an entirely different person and sex is frequently required for her in order to give her energy to live. Once in awhile they talk, ending up on the roof of his apartment where he keeps pigeons. Amelia indicates to Weed that she is there on vacation and the spaceship is due to pick her up the next day. When Weed's buddy Payne, finds out about his alliance, he tries to convince Weed to stop and turn in Amelia, but Weed tells him he is in love. with all those women. Soon after, Payne decides he can no longer protect him. Weed is put on the most-wanted list by The True World Forces. Finally, Weed and Amelia make their way towards the spaceship. In doing so, however, Weed is in a gunfight with Payne and is wounded in the shoulder . Amelia pulls Weed into the spaceship as she speaks in a moral tone and says: "You believe in gun power to protect yourself from destruction. I believe in pleasure for protection." And, our couple jets off into space.

Several pigeons are seen in a cage when Weed is on the roof of his apartment. In one scene he briefly strokes one of them. The sounds of crickets and roosters can also be heard.