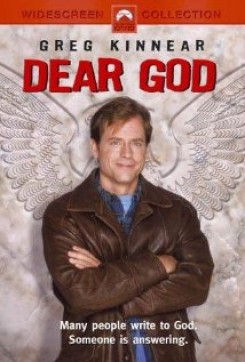 Dear God is a film about Tom "the con" Turner, who, after being arrested for trying to con two undercover police officers, takes a plea bargain in lieu of a jail sentence for retribution for past crimes. The arrangement is that Tom must find a legitimate job and keep it for at least a year. He contacts his cousin who works as a security guard at the post office and obtains a job in the Dead Letter Office. This office is where all of the undeliverable mail goes to be sorted such as, letters to Santa, God, etc. Tom goes from con to hero after he and his fellow workers start answering the prayers and wishes of people whose letters are addressed to God.

There is a scene where Tom makes a dying little girls wish come true when he takes her to the race track to ride a horse. The girl is seen walking the horse a short distance in a fenced area. Then the group moves into the stables and horses are seen in the background in their stalls. A few horses are seen poking their heads out and whining. Rebecca, a postal worker, is supposedly video taping the birth of a foal. The foal is not seen at that time. Later at the post office, Rebecca shows the video tape to the other workers and the foal is seen attempting to stand for the first time. This scene was shot at the Los Angeles Equestrian Center. The actor was placed on the horse and walked the horse a short distance from A to B. For the segment in the stables, a 2 1/2 day old filly was used. To give the illusion of it just being born, the trainer applied maple syrup to his coat. Someone was with the mare and filly at all times. In one of the letters to God there is a plea for animals to be taken to a retirement center. Tom and his co-workers are each seen carrying a dog or cat into the retirement center for the people to pet. For this scene the trainers placed the animals with the actors and they proceeded to place them in the laps of the elderly people. One cat was held by a nurse. After completion of the shot the trainers retrieved the animals. There is a scene where Rebecca has taken the little girl to the petting zoo on Olivera street. A pig is seen in his pen and a lamb is seen being petted by some children and the little girl is sitting on a donkey. There is a reference made to a dead duck in one of the pens but the duck is never shown. When Tom is charged with tampering with the mail, Rebecca, a former attorney, defends him. For her summation she brings into the courtroom two dogs on leashes. The dogs lay down on the floor and Rebecca does the same as she feeds one of the dogs a milk bone. The actor walked the dogs into the room on leashes and the dogs respond to their trainers commands for the few behavioral stunts. Other animal action consists of some dogs seen in various scenes on leashes with actors. There is one scene in a neighborhood where dogs are seen sitting, lying or standing in their own yard as a postal worker delivers the mail. In front of the courthouse there is a brief shot of a man with a parrot sitting on his arm.