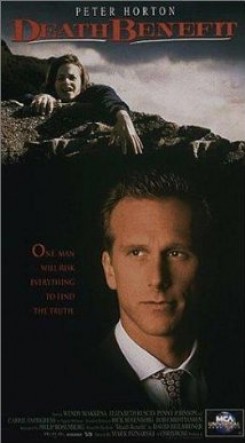 Death Benefit is a drama based on a true story. Steve Keeney is a very successful corporate attorney in Kentucky. At church one day, Louanne Wilkens asks him if he can help her get the money she is owed by her insurance company. It seems that Louanne's daughter, Melissa, was killed in California when she fell off a cliff and the insurance company has not paid Louanne for her daughter's burial expenses. Steve feels sorry for Louanne, so he offers to call the insurance company, thinking that when the insurance company gets a phone call from a prestigious lawyer, they will send out a check immediately. However, when he calls he finds out the insurance company is holding the check because there is an investigation pending. A life insurance policy was taken out on Melissa the day before her death by BJ and Virginia McGinnis, the people Melissa was staying with at the time. Steve is suspicious of the McGinnis's and decides to look into the matter further. He finds out that Virginia's five year old daughter, Cynthia, had also been killed and Virginia had started over eleven fires before Melissa's death and had collected on these insurance policies. Steve gets enough evidence together to try and put Virginia McGinnis in jail for the murder of Melissa Wilkens, but the judge says his evidence is inadmissible because Cynthia's death and the fires were before Melissa's death, which makes his evidence irrelevant to the case. Steve decides to try a different tactic. He takes the jury out to Monterey where Melissa fell and proves to the jury that BJ McGinnis pushed Melissa off the cliff while Virginia stood watching and then continued to take pictures of the scenery. Before the trial, BJ McGinnis died of emphysema. The jury found Virginia McGinnis guilty of premeditated murder and murder for profit. She is currently serving a life sentence without possibility of parole.

When Steve is investigating Cynthia McGinnis's death, he goes to the barn where the little girl's body was found and listens to the sheriff explain how she accidentally hung herself while she was standing on a tractor. As Steve listens to the story, he looks around and briefly envisions the little girl. She has sad eyes and is just sitting on her pony. To achieve this vision, the wrangler merely positioned the little girl on the horse. The little girl held the reins and walked the horse about 20 feet to the second wrangler. In another scene where Steve is gathering evidence against Virginia, he is talking with Dick Coates, her first husband, and chickens are seen in the far background. The trainer had simply placed grain on the ground to get the chickens to remain in that particular area.