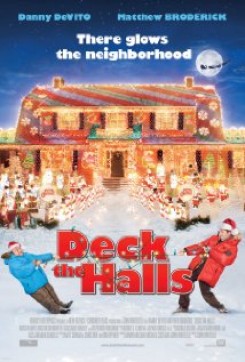 Danny DeVito and Matthew Broderick light up this holiday farce about warring neighbors desperate to outdo each other for the unofficial title of Man with the Most Christmas Spirit. Deck the Halls was filmed outside of the United States, and 20th Century Fox made arrangements for American Humane's Certified Animal Safety Representatives to supervise the animal action on location in Canada. American Humane applauds productions that commit to the humane treatment of the animals in their films even beyond our borders, and encourages other producers filming internationally to make the same commitment.

A sleigh ride photo opportunity in Buddy Hall's (Danny DeVito) yard turns into a nightmare for Steve Finch (Matthew Broderick) when the two horses pulling the contraption startle and run amok through the main street of town. This amazing sequence was filmed in a multitude of choreographed cuts to create a convincing impression of complete mayhem.

Comprehensive safety meetings with cast and crew preceded the filming of this scene. In all takes with trotting horses, an expert horse driver guided the sleigh. In some instances, the driver appeared in costume seated on the sleigh; in other takes, he acted as a hidden "blind" driver and cued the horses via cabled reins fed through a slot in the front of the vehicle. During these "blind" driving shots, an additional stunt driver on the sleigh used verbal cues to both influence the horses and provide auditory direction to the driver hidden in a padded roll cage located under a sack on the sleigh floor.

Stuntmen stood at each camera as a safety measure, and costumed wranglers appear in the film as townspeople in the street and as utility workers with a ladder who jump out of the way as the horses approach. Before each take, one mounted trainer cantered ahead to make sure the way was clear and to assist in stopping the horses at the end mark if needed. Cars driving in the scene completed their courses before the horses started their runs.

The sleigh's runners had plastic underneath to make them slide easily. Because the journey is meant to look utterly out of control, the driver had to carefully guide the horses so that the sleigh veered sideways and bumped against unseen sandbags on the ground next to some of the parked cars. One of these cars had been fitted with a door rigged to open all the way when hit. According to the Certified Animal Safety Representative monitoring the action, this controlled jostling did not affect the horses in any way and they continued unfazed to their end mark.

In one shot, the sleigh darts straight at Mrs. Ryor (Jackie Burroughs) and her poodle, who are standing in the middle of the street. During filming, a stunt woman stood in for Mrs. Ryor and scooped up the poodle out of the sleigh's path. For the close-up shot of the actress and dog, no horses were on the scene.

For shots from Broderick's point of view, wranglers pushed the sleigh to reduce the weight, and in some takes, a small tractor device called a "mule" pulled the vehicle instead of the live animals. When the sleigh broke free from the horses, throwing Steve over the side of a snow ledge, the horses' hitch separated from the sleigh with an air pin operated via remote control.

In yet another attempt at total holiday domination, Buddy unloads a camel, cow, donkey, goat and sheep from a large truck and sets up a manger in his front yard. The stock trailer was bedded with sawdust and large enough to hold all of the animals at the same time. On rolling, costumed trainers unloaded the animals and walked them over to the nativity shed. Once settled, with their lead ropes tied to the structure with quick-release knots, the animals simply stayed in place as their trainers stood nearby and occasionally fed them grain or hay to keep them entertained. Snow swirling in the air came courtesy of a large fan blowing lightweight paper flurries.