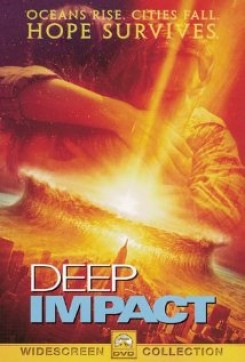 Deep Impact is a film about a Comet that is larger than Mount Everest-unstoppably hurtling toward earth.

There is a scene at a facility called Noah's Ark where several different species of animals elephants, raccoons etc., are being unloaded from railway cars. This scene was shot in cuts. The animals are either in cages or kept on leads. Thirty-six trainers and wranglers were strategically placed around the perimeter of the animals. Trainers and wranglers doubled as extras, taking care of their own animals. Other animal action consisted of a dog barking and walking from A to B and some pigeons in the background at a park.