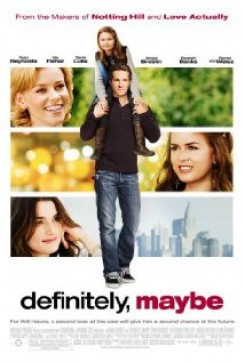 Will (Ryan Reynolds) tries to explain to his 11-year-old daughter Maya (Abigail Breslin) about his divorce and how he met her mother.

Dog Will and Emily (Elizabeth Banks) are sitting on a bench in one scene as an actor walks past them walking a dog on a leash. A miniature cocker spaniel owned by the director was used for this scene. The dog was introduced to the cast and crew before filming began. He was handed to the actor right before filming began and retrieved right afterwards. The dog was rewarded with a treat between takes. All grounds were checked ahead of time to make sure it was safe for the animal. Penguins The scene in which Will and Maya go to a zoo and watch the penguins was filmed at the Central Park Zoo in New York, and the penguins were filmed in their everyday zoo habitat. Due to limited resources and/or scheduling conflicts, American Humane did not monitor all of the dog action that appears in the film.