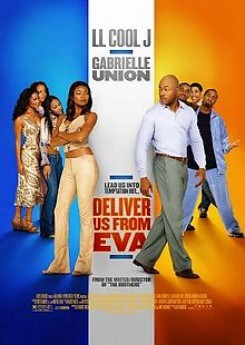 Deliver Us From Eva

Eva Dandridge is a very uptight young woman who constantly meddles in the affairs of her sisters and their husbands. Her in-laws, who are tired of Eva interfering in their lives, decide to set her up with someone so she will leave them alone. They end up paying Ray, the local "playboy," to date her. The plan goes smoothly, until troubles arise when Ray actually falls in love with Eva.

Eva is on a white horse in full riding gear. Ray, is atop a horse behind her, trying to impress her but not riding as confidently as she is - in fact it looks like he is going to fall off of the trotting horse. Then we see the two actors walking, leading the horses as they talk. The actress had rehearsed the riding sequence on several occasions before filming and trainers stood off camera for safety during production. A stuntman doubled for the actor on the horse whenever possible. When the actor was riding on the horse, a trainer held a lead while hidden from camera range to make both the animal and the actor feel more confident.

Later during a montage sequence where Eva and Ray are trotting on horseback along a trail, Ray is riding a bit better. Also in the montage is another shot of Eva trotting on Romeo, her white horse. This sequence was done in the same way as the above scene. A stunt man doubled for the actor while trainers stood off camera. The actress rode the horse as trainers helped her mount and dismount.

Ray appears sitting on Romeo, the horse, inside the lobby of a building. The horse rears up and Ray falls off. Eva ends up comforting the horse once it is back outside on the street and appreciates the romantic effort made by Ray. Eva mounts the horse with Ray and they ride down Lake Shore Drive along with two mounted policeman. The cameraman filmed the actor on the horse as the trainer held the reins. Then a stuntman rode the horse into the building and the horse reared up on command as it was trained to do. The area of the building's floor where the horse walked and reared was carpeted to help the horse's traction. The stuntman made it appear as though the actor fell off the horse when it reared up. In post production they edited the scene so that it appears as though the actor is on the horse the entire time. As the two actors rode the horse slowly down Lake Shore Boulevard, stunt riders posing as mounted police rode alongside them. Trainers were waiting one half block up the street to retrieve the horses. Cars began to slowly move in behind the riders, but all of the cars had stunt men driving and they proceeded very slowly behind the mounted riders.