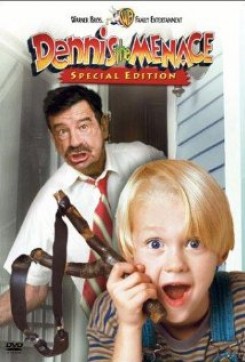 Dennis the Menace brings Hank Ketcham's comic strip characters to life in a delightful comedy for family audiences. As five-year-old Dennis Mitchell wobbles down the street on his new two-wheel bike, all people and animals scatter to avoid him. It's not that they don't like the tow-headed tyke, it's just that he seems to be a magnet for catastrophe. Nobody tries to avoid Dennis more than his next door neighbor, George Wilson, a curmudgeon of a man, who considers Dennis a menace. Whenever things go wrong at Mr. Wilson's, Dennis is usually the cause. When Mr. and Mrs. Mitchell have to go out of town on business, nobody wants to baby-sit Dennis. As a last resort, the kindly Mrs. Wilson offers her hospitality, over Mr. Wilson's objections. With his pint-sized nemesis now under his roof, Mr. Wilson makes preparations to host a garden party where he will be presented with the Garden Club's highest honors. It doesn't take long for the mischief to begin in a plot that involves a burglary and Dennis being held hostage.

For the opening scene a variety of animals were filmed separately and the footage was edited into the entire scene. Numerous pigeons were released from boxes so that they could fly through camera frame. Other birds were similarly released. A squirrel scampers up a tree. The squirrel had been trained to respond to a buzzer and ran to a food reward. Two cats run through the scene from opposite directions and bump into each other. This scene was achieved partly by accident. The cats were supposed to run past each other running A to B from opposite directions. The cats were each placed in position, then released as they were called to other trainers by means of a clicker and a food reward. This scene was filmed several times and, in one of the takes, the cats accidently collided. Neither cat was harmed and they did several more takes without bumping. Dennis' dog Ruff is present in many scenes throughout the film. All of Ruffs' actions were simple and were achieved by way of verbal cues from his trainer and food rewards. After Mr. Wilson mistakes Ruff for Mrs. Wilson, Ruff makes a hasty exit from the Wilson house. The speed of the exit was exaggerated through camera technique. There are other dogs seen briefly, primarily as atmosphere in very simple action. Additional animals seen briefly as atmosphere are an owl in a tree, a small snake, and grasshoppers in a jar.