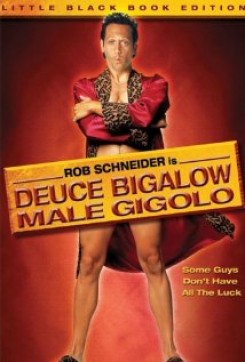 Deuce Bigalow: Male Gigolo is a film about Deuce, a fish tank maintenance man who becomes a gigolo to pay for the damage he did to a professional gigolo's, apartment.

There are several scenes where a variety of fish are seen in the background in aquariums, in a pet store, homes, offices, etc. In one scene Deuce is supposedly attacked by a koi fish in a koi pond. The attack was accomplished using an animatronic fish. All of the live koi were kept in a secured area of the pond away from the actor. While Deuce is taking care of Antoine, the professional gigolo's sick fish, he accidentally knocks over the large aquarium and it crashes to the floor. After the aquarium breaks, Deuce picks the fish up placing them in various containers filled with water. For a split second, a few of the fish are seen on the floor. This scene was shot in cuts. All of the containers were aerated for the fish. The glass on the floor was made of a latex material which felt similar to Jello. The real fish are seen in the aquarium. There aren't any fish seen when the tank crashes to the floor. Real and fake fish were used and no live fish were kept out of the water longer than a period of thirty seconds. There is a scene where Deuce and his girlfriend Kate are eating in a Sushi restaurant when they save a puff fish from being chopped up for consumption. Deuce has the fish in a plastic bag and he supposedly releases it back into the ocean. Deuce opens the bag and pours the fish out and into the ocean. This scene was shot in cuts. The fish was poured from a distance of approximately 1_ feet into a large bucket filled with water. While visiting one of his clients, Deuce is almost attacked by the woman's German Shepherd that is in the closet. The dog is heard bumping against the door trying to get out of the closet and into the bedroom with its owner. He finally gets out of the closet and the woman quickly escorts Deuce out of the room. As they stand outside the bedroom door the dog is heard bumping into that door as he still attempts to get to Deuce. The doors were made of balsa wood and a fake dog's head was used to make the pre-made holes for the real dog's head to be seen. Trainer #1 placed the dog on its mark behind the door with the holes and trainer #2 on the outside cued the dog with a towel. The dog wanted the towel so he shoved his way through the easily breakable balsa wood. The vicious sounding snarling was accomplished with the use of a special effects snarling device. In another scene, a girl working at a pet store puts her hand in an aquarium to retrieve some sea snails for Deuce. Fake snails were used for this scene and for other scenes where someone is reaching into an aquarium. There are several scenes where a cat is seen doing mild behaviors such as sitting on a kitchen counter or in someone's lap. For all of these scenes, the cat was placed on its mark and given verbal and hand commands with a food reward. Later, the cat is sitting on the floor while breakfast is being prepared and an open egg accidentally falls onto the cats head. The trainer placed the cat on a sit stay and then gently spills a cup of broken egg onto the animal's head. The egg was immediately cleaned off of the cat at the end of the shot. Other animal action consists of a police dog on a leash and another dog that while restrained, lunges and barks at Deuce as he passes. The animals were placed on their mark and cued with verbal and hand commands with a food reward.