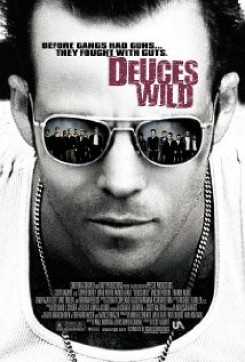 Set in 1958 Brooklyn, Deuce’s Wild features Stephen Dorff as Leon, the leader of a tough New York street gang, the “Deuces,” who is haunted by the drug-related death of his brother three years prior. Amidst regular battles with rival gang, the “Vipers,” Leon meets his dream girl, Annie (Fairuza Balk), who, unfortunately, comes from the wrong side of the street.

Forty-two homing pigeons were used in one scene, nine of which were released by their animal trainer and flew home to their compound in Riverside, CA from the studio lot in Hollywood. The others were placed in a hutch on the set rooftop, where they contentedly perched. Per AHA Guidelines, all of the birds were banded-which means that an identifying tag was attached to each bird's leg right above its talons, indicating the bird's owner, id number, and compound location in case one got lost or injured along its journey home, it could be identified and returned safely.

A kitty makes a swift appearance in a later scene, when Annie interrupts its kitchen cabinet litter box rendezvous by abruptly opening the cabinet door, prompting the cat to run to a nearby closet in embarrassment. Trainers cleared the cabinet of any debris that might harm the six alternating Tabby cats before placing one inside the cupboard with the litter box. Another trainer hid in the closet and used a buzzer sound to call the chagrined cat to her.