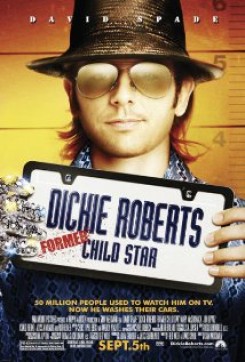 David Spade plays Dickie Roberts, a young man who appeared on a successful television series when he was a kid. As an adult he tries to get back into show business without much success. Dickie decides to hire a family to live with and re create the childhood he never had.

PigeonsSydney is played by Jon Lovitz and is Dickie’s agent. There are a few scenes in the beginning of the film where Sydney is on the phone in his office and pigeons are gathered on the windowsill outside. A trainer tethered eight pigeons with monofilament lines on the large ledge outside the window. Food was scattered to keep the birds occupied. As Dickie begins his search for a family to live with, he pulls his car up in front of a house and begins to walk up the front walk when a large pit bull mix dog comes running towards him. Suddenly the dog appears to be yanked back hard from a chain he is attached to. A trainer attached the dog to the heavy weight chain and held the other end off screen. When the dog reached the end of the chain, the trainer held the other end and verbally cued the dog to stop so it really wasn’t a strain on the dog’s neck but a controlled stop.Popeye and Reba, the Family PetsAn English Mastiff named Bob played the part of Popeyeand a beagle mix dog played the part of Reba. There are several scenes where Popeye and/or Reba appear sitting or laying in the background with some of the family members. The dogs knew each other and the cast members so they were both comfortable on the set at all times. A trainer would place one or both of the dogs on their marks and then stand off camera using a combination of verbal cues and hand signals to get the action achieved. When we first meet Popeye, he comes bounding out of the back of a van as Grace unloads some packages in the driveway. A trainer was inside the van with the dog. When the actress opened the back of the van, the trainer released the dog and verbally cued it to jump down. The dog ran to Dickie who was standing on the lawn. The actor petted the dog and then another trainer who was hiding behind the van called to the dog. This prompted the dog to run over and receive a treat. Later that same trainer verbally cued the dog to follow the humans into the house. Dickie tries to control a water wiggle in one scene (a water toy that attaches to the garden hose). The water wiggle takes on a life of its own and begins to squirt all over. The camera cuts to Popeye and Reba sitting on the lawn and watching this spectacle. The camera cuts back to Dickie holding the hose as it is spraying water and then cuts back to the two dogs being squirted and crying. The two scenes with the dogs were filmed separately and inserted into the film during postproduction. A trainer put the dogs on their marks and stood off camera. The dogs were familiar with water play. A trainer used a squirt gun to spray the dogs and the sound effects were added in post production. The dogs were immediately towel dried.Popeye comes onto the porch with what appears to be a dead rabbit in its mouth. The dead rabbit was of course a prop, which the dog was very familiar with and came to regard as a toy. The dog drops the prop onto the porch and lays down next to it. A trainer was standing just off camera using hand signals to get the dog to achieve this action. An edible reward was waiting in the trainer’s hands when the scene was over. While Dickie and the kids wash the prop rabbit in a tub, Popeye sits beside them and watches. The dog was put on its mark beside the actors and sat happily while the scene was being filmed. Afterwards, Dickie brings it back to the cage and puts it back inside hoping the neighbors won’t notice. The rabbit in the cage next to the prop was a real one. A trainer prepared the cage for the rabbits’ comfort and placed the animal inside. SpiderDickie and the kids tell stories one night in the tree house and a tarantula crawls on Dickie’s shoulder. A trainer stood behind the actor and placed the Orange Kneed Tarantula on his back. The trainer blew air from a small straw towards the spider, which made it begin to crawl up the actors back and onto his shoulder.