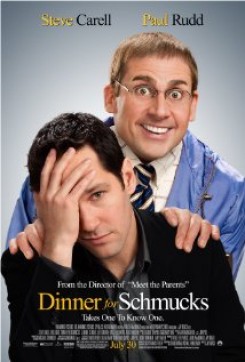 When an eager businessman learns he will impress the top executives by bringing the biggest loser to a dinner party, he ignores his moral compass and invites a needy IRS worker whose hobbies include dressing up dead mice to recreate scenes from his dream life.

Macaws, Goats, PythonDuring a photo shoot in a fake forest setting, two macaws and a python are seen in the background, along with some goats on rocks. Two macaws were placed on tree branches with tethers on their feet. Off-screen trainers held the tethers. The snake was allowed to rest on the tree at liberty during this brief scene while a hidden trainer stood next to it. A trainer also placed the goats on their marks and stood just off-camera, allowing the animals to do whatever came naturally.Zebra, Llama, GoatsFor a shot in which a zebra and a llama stick their heads out from inside a barn, trainers placed the animals on their marks inside the barn and hid in the stalls. In the background, goats were placed on their marks after food was scattered around. Trainers stood just off-camera.GoldfishThe production purchased the goldfish and the aquarium from a local pet store and the fish was maintained by a crew member, who later adopted it.VultureFor a scene in which a man sits at a table with a vulture on a perch next to him, trainers placed the tethered bird on the perch and hid under the table, holding the bird’s tether and allowing it to sit at liberty while the actors performed. Trainers used a bait stick to get the bird to look in certain directions.The vulture flies from a man’s arm to grab a severed finger off a large dining room table, and then runs across the table with it in his mouth, finally taking flight out a window. This well-rehearsed scene was filmed in separate shots. One trainer placed the bird on the actor’s arm (on a protective sleeve) while another trainer on the other side of the room called to the bird to fly to him. This same method was used for all flying action. The table had been set with nonhazardous props, such as electric candles, soda instead of coffee in the coffee cups, and champagne glasses made of breakaway “candy” glass, and when the vulture ran on the table, these props were rigged to “break” or fall. For the shots in which the vulture flew to the end of the table to grab the finger, trainers placed a small piece of meat on the vulture’s end mark and cued the bird to “get” it. This prop meat was later replaced with a computer-generated finger.For the shots in which the men attempt to grab the vulture, the actors exaggeratingly “grabbed” at the bird as it flew by, and the bird was completely uninterested in them and their pantomimed gestures. The bird only flew once - a computer-generated vulture filled in the gaps in the scene.For the shot in which the vulture flies through a flaming window, jagged broken glass edges were removed, no actors were present and the bird did not fly through fire. After a couple of takes, this same shot was filmed without the bird as actors pantomimed grabbing a bird while the drapes were on fire. These takes were then combined in post-production.An animatronic bird was used for the shot in which the man feeds the vulture from his mouth. Production provided documentation on the prop mice, deer head and zebra rug, and on the stock footage of the monkey eating paper.