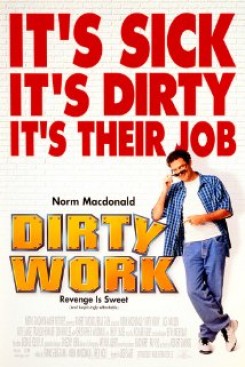 Dirty Work is a film about two longtime friends and the get rich quick scheme they develop called Dirty Work Inc. "Revenge For Hire".

There is a scene where a Doberman chases two boys. Later, a German Shepherd chases, overtakes and mounts the Doberman. In two other scenes, the guys are putting dead fish inside a house to exact revenge for a customer. They place the dead fish in various places, inside the walls, in plants, ovens, in a washer, under a mattress, etc. One of the guys drops a fish when he hears the owner approaching. The dead fish were purchased by the production at a market. Other animal action consists of some cockroaches placed in a bed and 3 skunks sitting in a cage. There are several scenes of a dog being held in a man's arms.