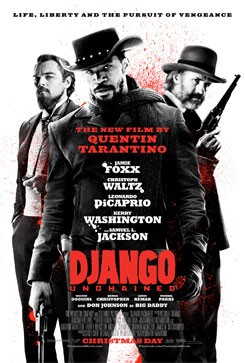 As a Western, you can expect a ton of animals, most notably horses. The American Humane Association was there for all animal action for this exciting film!

All horseback riders were stunt riders or experienced actors who were skilled at riding, mounting and dismounting. All running/galloping scenes were well choreographed, and actors used caution while on and near animals. The horses were specially trained “falling horses” and “lay down horses” that fell on cue onto a soft landing area. Whenever horses were seen tied to posts/fences, they were attached to lead ropes tied to posts. The horse(s) rearing was a trained behavior.

In the opening sequence where we see horseback riders leading a line of shackled slaves in the snow, production used a snow machine to blow fake snow while stunt doubles rode the horses. When the slave traders encounter Dr. Schultz driving a horse drawn carriage and a gunfight ensues where Schultz shoots one horse in the head sending him falling to the ground lying on top of its rider, production used a realistic looking puppet horse for this scene. The puppet horse that got shot had squibs on its neck to shoot blood out. The puppet horse was also used for the fall and when the horse was dead on top of its owner. This includes the sequence when Django steps on the horse to torture the rider underneath him. The live horses wore earplugs for the gunshots.

Production provided receipts for the taxidermy dead chickens on the tree stump.

In the scene where Schultz shoots a man off his horse, spraying blood on the cotton, production shot the scene in a closed outdoor set, and on cue stuntman falls off the horse. The horse then continues to ride off-frame. Everything went smoothly.

In the scene where 33 mounted riders carrying torches and rifles crest over a hill and charge down at a gallop wearing sacks on their heads, production used stunt riders on all horses. Fence panels were used to keep loose horses away from set equipment. Horses were given twenty minutes rest time between takes.

In the subsequent scene where Schultz shoots the wagon and it explodes sending the masked men to fall off their horses, all stunt riders were prepped and briefed before the scene was shot and a veterinarian was on set. Safe zones were marked. Horses were sprayed with fire resistant gel. In post production, special effects made it look as if some horses were actually hit by the explosion. Horses and riders were placed at a safe distance from the actual explosion. When the wagon explodes, 14 falling horses were cued to fall at the same time. These horses were trained to fall on cue and the scene well choreographed. All horses were spaced out from each other so they would have plenty of falling room.

In the aftermath of the explosion when Bennett and the other masked men escape from the carnage, production had ten horses and riders ride away from the area. Fallen horses were cued to stand up. When Bennett is shot off his horse a stunt rider and horse who is conditioned to this kind of stunt was used.

In the scene where Schultz and Django ride in the winter with the snow rising up to the horses’ legs, production had a platform placed under the fake snow. The platform was covered with sandpaper to give traction and the horses wore cleated shoes.

In the scene where Django and Schultz shoot a farmer from a hilltop, the actor was squibbed while manning a mule hitched to a plow. The gunfire came from on top of the hill, far away from the mule.

In the scene where Django and Schultz ride towards a large herd of elk in a snowy field, prior to shooting a feeding truck dropped pellets of food for the Elk and Bison to keep them on their mark. A camera truck moved slowly behind horses to capture the scene.

When Django and Schultz ride towards a cabin, each leading a horse with a dead body thrown over each one, the bodies were fake and tied to the horses. The dead rabbit hanging from the cabin’s rafter was fake also. Production provided documentation for the fake rabbit.

In the scene where Django and Schultz accompany a procession to Candyland, all horses marched in a safe distance from each other. Wranglers were on the side of the road to make sure everything went well.

In the scene where dogs are barking at a slave in a tree, on action the trainers cued the dogs with hand signals to bark at the actor in the tree. The trainer stood behind the tree to make sure they barked in the right direction.