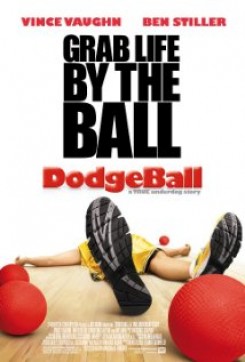 A cherished local gym faces extinction by a corporate sports and fitness club giant unless a group of social misfits can rise to victory in Las Vegas at the ultimate dodgeball competition.

In the beginning of the film, Peter (Vaughn) lies fast asleep on his living room couch. A cute shaggy dog enters and walks past the couch while the camera stays fixed on the snoozing man. Peter starts talking and smiling in his sleep and the camera pulls back to show the dog licking Peter's crotch. To achieve this bit of comedic genius, the trainer showed the dog his favorite ball and then put it inside the athletic cup that the actor wore under his boxers. One trainer released the dog, and it followed the hand signals and verbal cues of a second handler who got the dog to jump on the sofa and go after his much loved toy inside Vaughn's pants!

In another scene, Peter and some of his regulars hold a fundraising carwash to save Average Joes Gym. Across the street meanwhile, White Goodman (Stiller), owner of the Global Gyms chain, has his own car wash using stunning, bikini-clad women. White's carwash naturally has lots of customers while Peter's has just one—a man with a barking dog who watches lasciviously as Justin (Justin Long) washes his car. For this action, a trainer handed the actor the pit-bull mixed dog before the camera began to roll and then stood off camera using hand signals to get the dog to bark.

The image on the television screen of a squirrel waterskiing was stock footage that the production purchased.