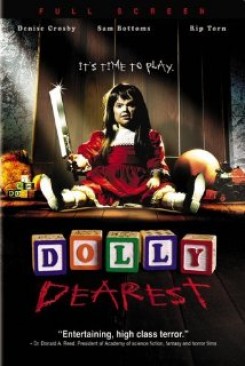 Elliot Wade moves his wife, twelve-year-old Shawn and seven-year-old Jessica to Mexico in order to cut costs to make the new doll Elliot has designed. Elliot starts to renovate an old doll factory which he purchased close to his new home. The factory is on land that is right next to an ancient Indian burial grounds that has been undergoing examination by archaeologists, until a mysterious accident occurred, leaving one dead. The tomb is supposed to be the site where the Sansia tribe, meaning Satan on earth, were to have buried their creation, the Devil Child, nine hundred years ago. The Devil Child was one with an infants body and the head of a goat who was suckled on the blood of young children. Due to the deaths of all their children, the Sansia were forced to bury the Devil Child, sealing the tomb which was never to be opened again. Elliot's first "customer" to have his new doll is his daughter. Jessica names her new friend Dolly, and as they are new to the area, Dolly becomes Jessica's best, and only, friend. Jessica and Dolly become inseparable. Jessica's mother starts to notice that her daughter is changing. Jessica starts to become more and more unmanageable. One day, in a hideous voice that is not her own, Jessica threatens to kill her mother if she tries to separate her and Dolly. This is when the realization sets in that the spirit of the Devil Child has taken the form of Dolly and was now trying, and succeeding, to enter Jessica. All of Jessica's family must now find a way to free Jessica of this impending doom.

In one scene when Shawn sneaks out of the house to investigate the burial grounds, he must pass through a grave yard. As he is walking through the grave yard a Rottweiler starts to bark and chase him. He has to jump over a gate to allude the dog. Shawn then heads for the warehouse, thinking that he has escaped the animal. He soon realizes that the dog is still in persuit. These scenes were shot in cuts. The dog and the boy were filmed running separately. The dog was called by his trainer, who was off camera, to "come" and "speak". Other animal action was minimal. A cat is seen walking in the warehouse, a Scottish Terrier is in one scene barking and a frog hops across the floor.