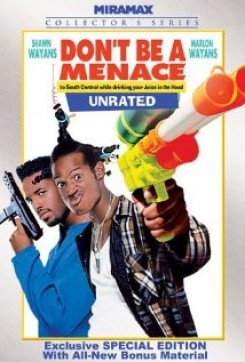 Don't Be A Menace To South Central While Drinking Your Juice In The Hood, is a comedy spin off of all the movies made about life in the hood or ghetto. Ashtray is a young black male who is sent by his mother to live with his father in the hood. Ashtray's mother believes it is important for him to know what it is like to live in the hood. The film unfolds as Ashtray is introduced to the neighborhood by his cousin, Loc. Dog. Loc Dog gives Ashtray the tour and in a matter of days he is exposed to the neighborhood whore, several gang fights, and a drive by shooting.