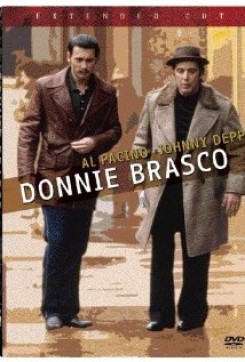 An FBI undercover agent infilitrates the mob and finds himself identifying more with the mafia life to the expense of his regular one.

There are a few scenes involving a lion. In one scene he is in a cage in a warehouse and in the other scene, he is in the backseat of a car while Donnie and Lefty, a thug, are feeding him hamburgers through the window. The trainer placed the lion on his mark and cued him with verbal and hand signals. Only those crew members necessary for the scene were allowed to remain on set. Other animal action consists of a dog race seen while Donnie is at a race track in Florida. The dog racing was an actual dog race taking place in the background at the Palm Beach Kennel Club race track. In another scene on a yacht, a man is seen with a fish in his hand, waving his catch at some women. The fish is not seen on a hook. The fish were purchased from a local fisherman/distributor and transported to and from the set in aerated tanks. While on set, the fish were kept in an aerated holding tank on a boat. All the fish were returned alive to the fisherman and he returned them to the water.